A comic book store inside a bookstore 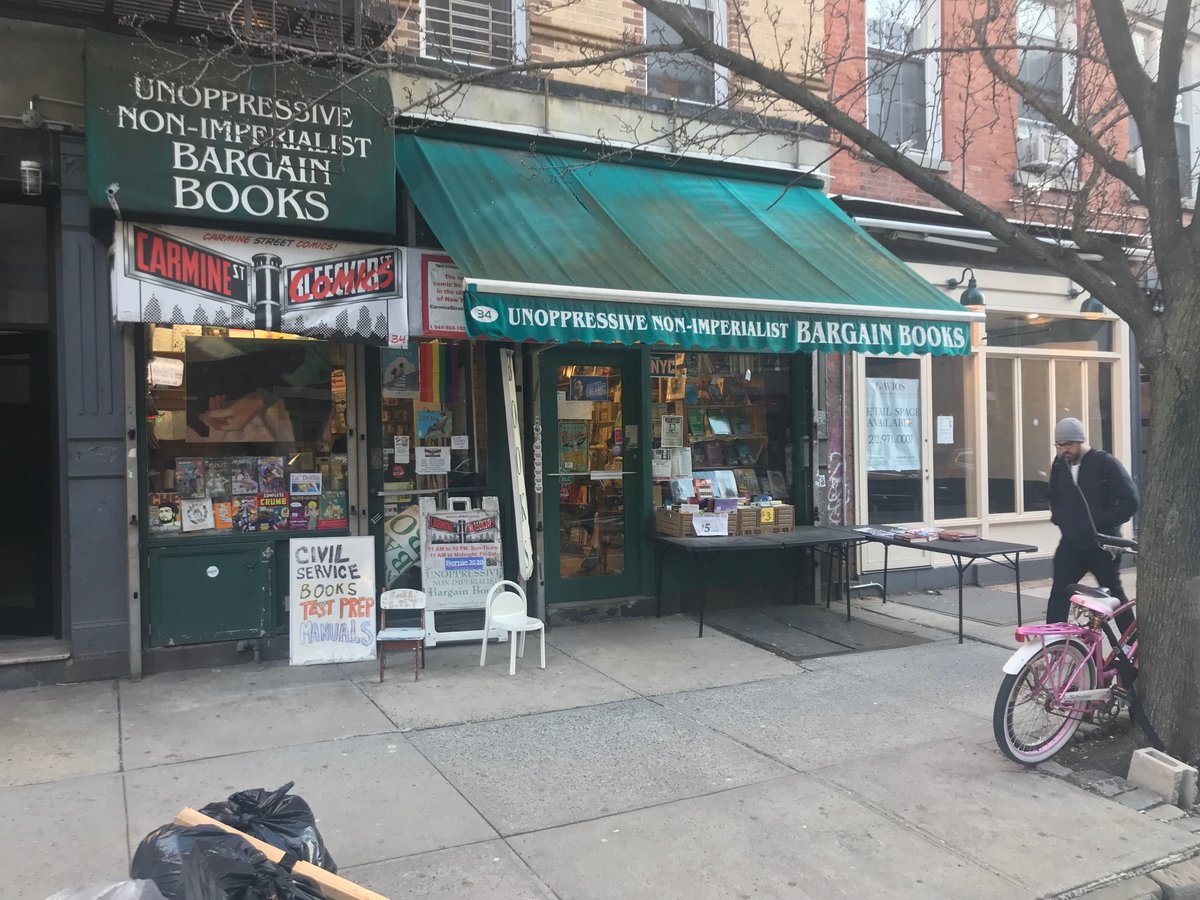 There is a bookstore in the West Village that sells “unoppressive, non-imperialist, bargain books,” as touted on its awning. The store has no name. You can’t tell it from the street, but inside this bookstore is another store called Carmine Street Comics.

The first time I stepped through the shop’s jangly door, Jon gave me a tour of Carmine Street Comics. It occupies about a quarter of the interior of the shop. He has a Diamond Comic Distributors account and will find and order for you whatever you like. If you don’t know what you like, he has recommendations.

Before long, I was reading Jon a list of titles from a Google Doc on my phone—stuff I’d been meaning to pick up, like back issues of Stray Bullets, Black Magick, and Monstress, the last trade paperback (TPB) volume of Ex Machina, the third TPB volume of Locke & Key, the latest TPB volume of Saga, Moebius’ The Incal, and Hugo Pratt’s Corto Maltese. It was a standard mix for a casual reader: a bit of catching up on classics, a bit of catching up on new stuff. Just like that, I started my very first pull list at Carmine Street Comics.

I’m a casual comic book reader. I grew up reading my older brother’s books—an eclectic hodgepodge that included everything from Marvel’s X-Men, Daredevil, and Silver Surfer to the edgier and, to my young mind, more “adult” titles coming out of Image Comics like Spawn, Savage Dragon, and WildC.A.T.s. As a kid, I loved the art inside comic books more than anything. I spent entire afternoons ignoring homework to trace the awkwardly bulging muscles of Rob Liefield’s Cable, or the impossibly spindly webs of Todd McFarlane’s Spiderman, with little care for the stories contained between the pages. I didn’t become a comic book buyer until my early twenties, when I discovered Neil Gaiman’s seminal Sandman series. I had just dropped out of college, and I craved slightly more sophisticated fare—something to fill the void that a proper education might have otherwise occupied. So, I devoured Gaiman and Frank Miller and Alan Moore and Grant Morisson. I purchased titles mainly on Amazon out of fear that walking into a proper comic book shop in search of decades-old titles would get me booted on the grounds of being some sort of poser.

Eventually, my to-read list ballooned. For a while, I frequented the Midtown Comics on Fulton Street, where I quietly picked up whatever I could find from my list, but I never spoke directly to the friendly store attendants. I even started to pick up single issues of new titles, including David F. Walker’s excellent—if entirely too short-lived—run on Nighthawk, Gabby Rivera’s America, and Ta-Nehisi Coates’ Black Panther. But my purchases were few and far between.

Walking into Carmine Street Comics was the first time I felt like part of a comic book community. To Jon, I’m still “the new guy,” but through my pull list, he knows something about me that reaches back to my childhood. In this way, my pull list functions like an encapsulation of my tastes and interests—from superheroes to social justice, it’s all there in the pages of my favorite comics. Every time I visit the shop to pick up a stack of newly arrived titles, he’s got some new recommendation—a spinoff series based on a title on my list, or the best app for reading digital comics. It’s awesome having a comic book guy; I highly recommend you find one. And if you’re in the neighborhood, be sure to stop into the nameless shop on Carmine Street. You might find something unexpected. —Danny Vazquez, Assistant Editor, MCD×FSG (@vazquezwithaz)