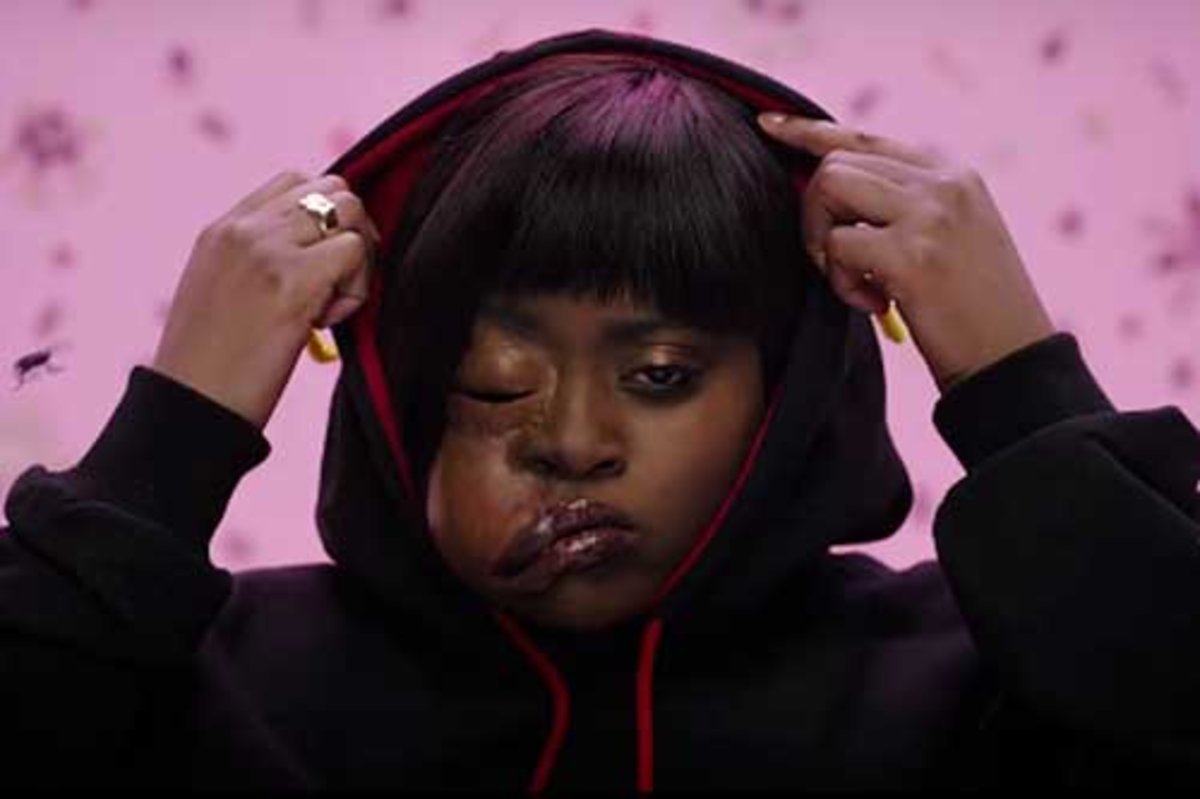 Philadelphia rapper-singer Tierra Whack’s debut album Whack World begins with an invocation: “Best believe I’m gon’ sell if I just be myself,” she sings on “Black Nails.” It isn’t a prayer, or even wishful thinking: she might be a stranger to you now, but after watching Whack World — a visual album comprised of fifteen 60-second tracks and corresponding videos — you’ll be converted.

Across the album’s fifteen tracks, Whack tries on, masters, and discards a series of genres and styles: trap, country, washed-out R&B, neo-soul, nursery rhyme, spoken word, and disassembled funk. Whack mumbles, huffs, hisses, and belts about her deadbeat dad, chicken wings, feeling sexy, feeling lonely, and missing her dog. She swings between morose and irreverent, vulnerable and unbothered. The accompanying videos place Whack in fifteen vividly surreal settings tailored to the tone of each song: in “Black Nails,” Whack gets a manicure at a nail salon while wearing a hoodie that is also a mask; Whack styles a taxidermy dog in “Flea Market”; in “Fuck Off,” she cuts the strings from red balloons in a white-walled room. Together, the scenes function as a collection of Whack’s various identities; watching her move between them is mesmerizing and feels akin to performance art — experienced as much as it is witnessed.

Since the release of Whack World in May, I sometimes return to it to listen to my favorite tracks, one by one, but usually I return to Whack World in its entirety, breezing through its fifteen minutes. With each 60-second song, Whack cuts to only the juiciest, catchiest bits — just try to get “Hungry Hippo” out of your head.

Whack World is the latest in a series of groundbreaking projects from visionary black women like Beyonce (Lemonade) and Janelle Monae (Dirty Computer), all projects that have spurned the traditional album format and disrupted how we’ve grown accustomed to consuming music. That’s no small feat in an industry that has trained listeners to anticipate a steady onslaught of pre-release streaming singles, surprise drops, endless remixes, and a dump of new music every Friday. The short singles double as an ingenious distribution ploy — when the album released, Whack posted the full album, and each individual song, to Instagram, making it possible to share Whack World in a DM.

In the words of Pitchfork critic Brianna Younger, Whack World triumphs thanks to Whack’s “captivating depiction of a black woman’s imagination.” Whack World is boundless; in its universe, Whack moves freely between moods, sounds, and scenes, full of self-love. “I know that I’m worth mo-o-o-o-re,” she sings on the album’s closing song, “Waze.” Whack has no story to tell but her own, and she tells it exactly as she wants. —Jackson Howard, Assistant Editor, FSG Originals