Siri, can you tell me how to get to Sesame Street? 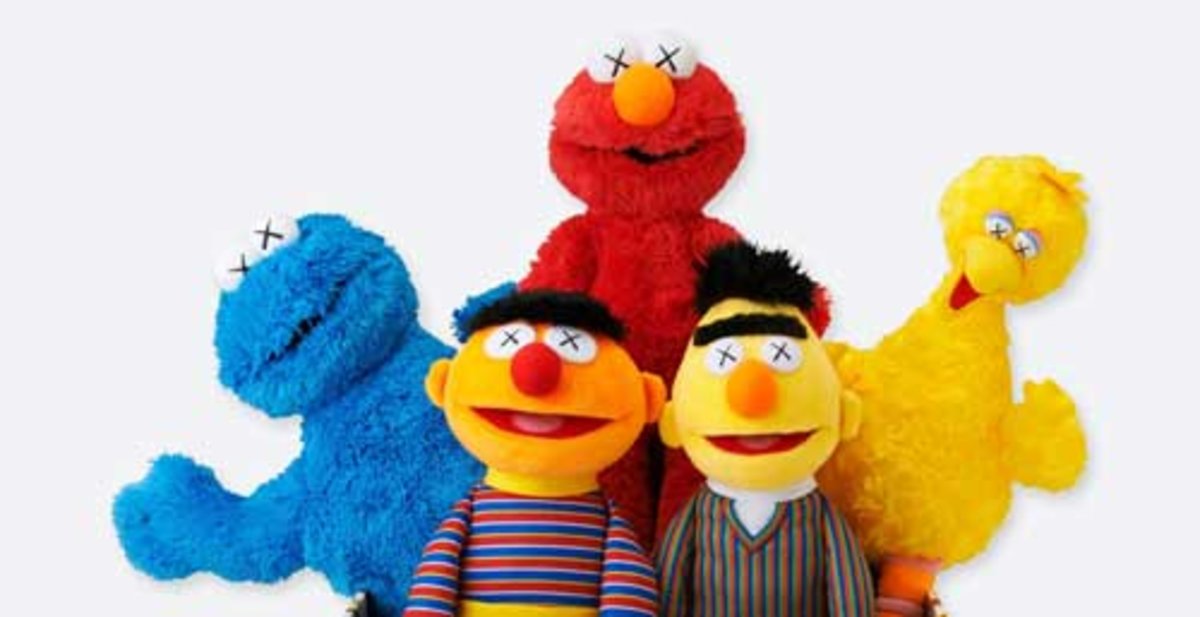 I know this because Sesame Street is staggeringly pervasive. By the end of its 49th season, which premiered last weekend, it will surpass 4,500 episodes. It airs in 140 countries. In 1996, 95% of American preschoolers had watched the show before they were three years old.

There’s not really another cultural phenomenon like it: a continuously generative creative project that’s as vital and vibrant now as when it started, that is as profoundly engaged with the world now as it was fifty years ago. When Sesame Street premiered in 1969, its first celebrity guest was James Earl Jones. It later hosted Maya Angelou, Roger Ebert, Ice Cube, Stevie Wonder, Lupita Nyong’o, Ray Charles, Yo-Yo Ma, Venus and Vanessa Williams, and hundreds more. The upcoming season will feature Chance the Rapper, Tiffany Haddish, Solange Knowles, Jenny Slate, and Questlove.

No other television or film enterprises can compare with Sesame Street’s longevity or cultural significance. Mister Rogers’ Neighborhood still resonates across generations, but — not to put too fine a point on it — a key, purposeful part of Sesame Street’s identity is that it’s not about the generosity of a soporific white guy in a sweater. The Marvel and DC Comics universes are similar, but they’re too sprawling and inconsistent, too dependent on reboots and do-overs, to compete. Star Wars seems like the most obvious comparison: its fiction universe is certainly impressive (and Chewbacca probably has some Muppet DNA). But it’s set “a long time ago in a galaxy far, far away,” while Sesame Street is avowedly of our world, right around the corner. Besides, Harrison Ford’s just not in the same league with Carol Spinney. And people care — a lot — about Luke’s relationship with his father, but not the way they care about Ernie and Bert.

I started thinking about Sesame Street again for the obvious reason: I have a three-year-old son. He first met Cookie Monster not by watching the show, but by calling him, on the phone, with the Cookie Calls app that the Sesame Workshop developed with the design firm IDEO. (He also calls Elmo on the Elmo Calls app, but Cookie is the superior Muppet, a true original, while Elmo is an interloper who didn’t arrive on Sesame Street until 1980 and is to blame for the show’s least cool spin-off, Tickle Me Elmo. So we will focus on Cookie.) You can video chat with Cookie while he’s in Brazil or in India or on the Great Wall of China. He might talk to you about washing your hands or wearing sunscreen, or he might sing you a song. He might call you! At dinner or at bedtime, maybe the phone rings and it’s Cookie, ready to sing and eat and just stay in touch. (To be clear, these are recordings of Cookie Monster, not on-demand Muppeteering.)

I was particularly fascinated when we discovered Cookie Calls because I was editing a book (which we’re publishing next year) called User Friendly by Cliff Kuang and Robert Fabricant. It’s about the rise of user-centered design, and IDEO — the firm responsible for, most notably, designing Apple’s first mouse and the development of “design thinking,” which has infected innovators and wannabes everywhere — is at the center of that story. The success of IDEO’s design approach is clear as soon as you open the app: they’ve stripped down the functions of the phone and the charm of Cookie Monster into a pure hit of delight. Much more than an uninspired attempt at making something interactive for the sake of it, the app brings Cookie Monster where you are, makes him play by the device’s rules, and places the audience at the center of his universe. It’s brilliant.

It turns out Cookie’s not just talking to toddlers. He has a Twitter account, and it’s exactly what you want it to be: 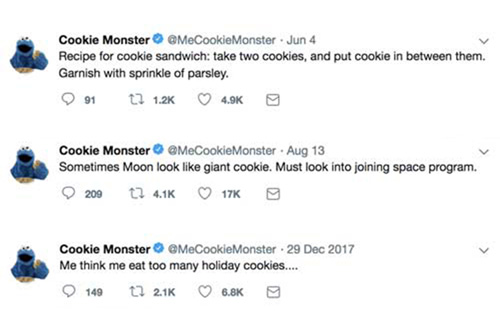 While the latest Trumpian nightmare is unspooling elsewhere in your feed, Cookie Monster’s Twitter delivers a special salve, if not an actual antidote, as he sings the praises of, well, cookies. And it’s important, at least to me, that it’s not leveraging nostalgia as escapism. After all, Sesame Street dealt squarely with the death of Mr. Hooper and 9/11; introduced an HIV positive character, Kami, in South Africa in 2002; and debuted Julia, an autistic muppet, last year. Cookie Monster’s enthusiasms are not in a blinkered vacuum.

And they’re all here: Big Bird, Bert, Ernie, Elmo, Oscar, Grover. The kids aren’t here, but that’s not the point — the Sesame Workshop wants adults to smile and be inspired, too, and I am grateful. It also underlines what is special and essential about Sesame Street as a storytelling project: they’re in here, in it, with us. The image at the top of this piece is from a current collaboration between Sesame Street, UNIQLO, and the artist KAWS. I can’t say I know why Sesame Street is doing it, not exactly. It’s troubling; it’s of our moment; it’s weirdly powerful and feels more deeply subversive than anyone involved can possibly be aware of, but I’m sure they are. —Sean McDonald, Publisher, MCD