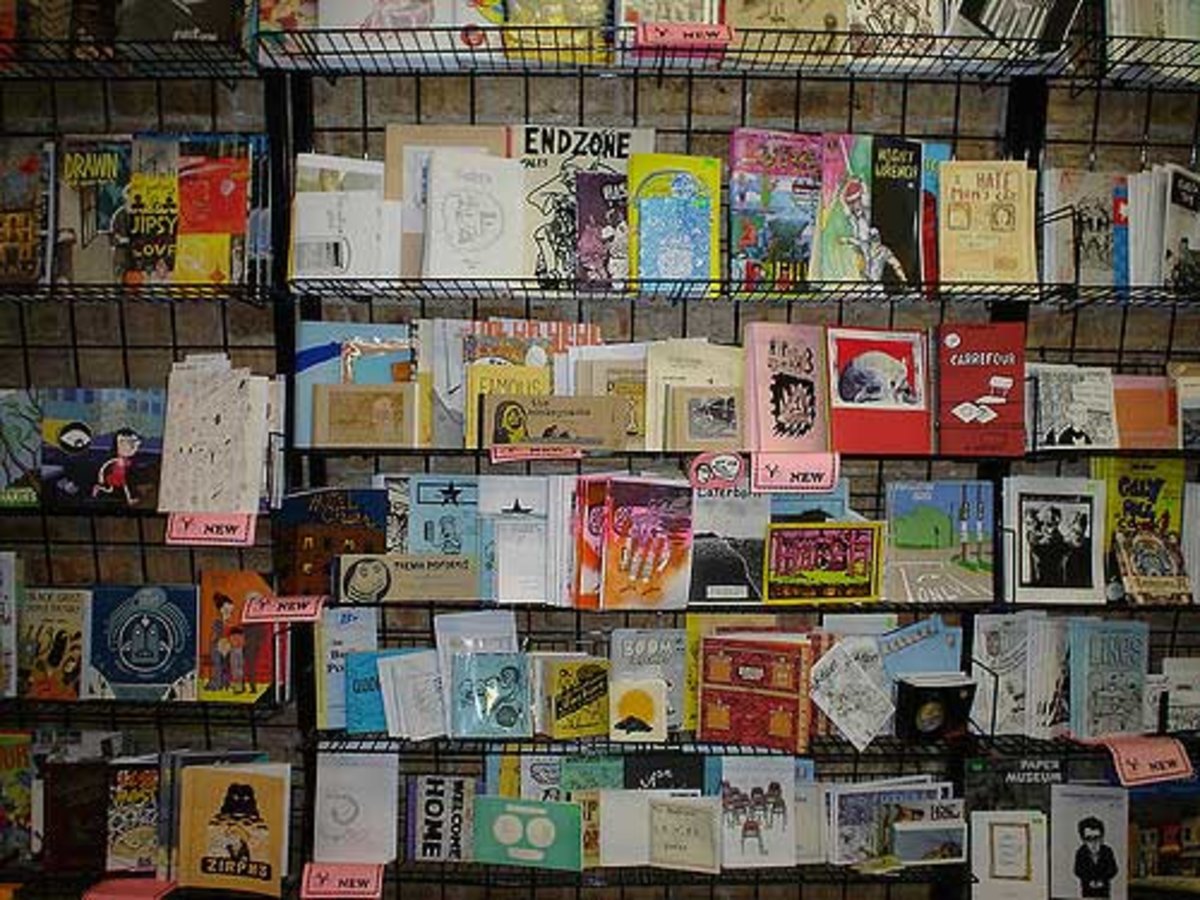 I was nineteen or twenty the first time I wandered into Quimby’s, the much beloved independent bookstore in Chicago’s Wicker Park neighborhood. Calling Quimby’s a bookstore doesn’t quite capture it; it is so much more than that.

Quimby’s has been a fixture in Chicago’s independent publishing community since it opened in 1991. It stocks an impressively diverse selection of zines, periodicals, comics, chapbooks, prints, and other DIY art and oddments. It hosts regular events with writers, zine makers, comics artists, and printmakers. Several of the staff are artists, too; many of them sell their work in the store or at the city’s several zine festivals, like CAKE and Chicago Zine Fest.

I spent nearly two hours browsing the shelves that first day: a zine of jokes about menstruation was printed in bright red ink; a plastic magnifying glass dangled from the spine of a square pamphlet that fit in my palm; another zine unfolded like an accordion when I picked it up, and could be read backward. Other zines criticized pro-life legislation, mourned climate change, denounced the police, made fun of Taylor Swift (before we were all making fun of Taylor Swift), worshipped Michelle Obama, listed recipes for vegan pizza.

I was new to Chicago at the time and spent a lot of time walking around, kind of lost. Finding Quimby’s was a relief; I knew it was a place I would return to, a place that would inform the way I oriented myself in the city. After I left, I caught a bus heading north toward my apartment. During the ride, I read each of my purchases carefully, cover to cover. I felt the ultra-smooth blocks of black Xerox ink, mounds of crumbling glitter glue, knots in binding thread, the sharp points of staples. It was clear that whatever I had discovered at Quimby’s — a community? a creative philosophy? a political movement? — had been part of a lot of other people’s lives for a long time. It didn’t matter that I was a late arrival; I was just glad to have found it.

A large part of why I work in books and community-building is because of that moment — that is, because of young people lost in a bookstore, anywhere, looking for permission to make art, for expressing outrage, for tips on how to dye their hair, or for sharing the particular good fortune of a recipe for a heavenly lemon meringue pie.

This past summer I stood in the courtyard of the building in Greenwich Village that houses the School for Poetic Computation, tangled up with a few dozen strangers. We were literally tangled — moments earlier, we’d been handed nylon ropes and lengths of pipe and were instructed to use them to create a circuit with our bodies. I looped the rope through two of my fingers and held on; I watched others wrap it around their arms and legs, or thread it through their clothing. The exercise was reminiscent of team-building obstacle course challenges I’d had to complete in high school; I found it difficult to take it seriously. But that wasn’t the point. I appreciated the surprise of it, and the creativity it required. We were all gathered there for a lecture on the “realm of the uncomputable.” We could instead have been sitting in chairs, staring mutely at a screen.

Beginning a lecture with a circuit-building exercise is a pretty characteristic approach for The School for Poetic Computation (SFPC), which aims to encourage creative and artistic directions for exploring digital technology. According to its mission, SFPC focuses on “the mechanics of programming, the demystification of tools, and hacking the conventions of art-making with computation.” It supports “completely strange, whimsical, and beautiful work.” It is a community, a creative philosophy, a movement. It reminds me of Quimby’s.

It’s why I’m excited that SFPC is hosting the first-ever New York Tech Zine Fair this weekend, on Saturday, December 1. According to the website, tech zines can be distinguished from their counterparts only by their concerns — broadly, our relationship to computers, digital culture, future technologies, and artificial intelligence. Over email, co-curator Mimi Onuoha listed some examples of what guests can expect to encounter at the fair: “educational explainers about computing, activist zines about harnessing technology for community aims, zines that highlight personal experiences with social media or mobile apps, graphic novels about a future with robots, and more.”

According to its website, the NYTZF will feature artists like Kelli Anderson and Paul Soulellis, presses like PROPS Paper and Homie House Press, and will host some very rad workshops; I’m excited about Sensor Knitting 101 with Liza Stark, and Zines as a Friendly Introduction to Complex Concepts by Amy Wibowo of BubbleSort Zines.

If zine-making and DIY culture are celebrated for their prioritization of inclusivity, accessibility, and creativity, digital technology and the majority of its attendant communities certainly are not. I’m glad for SFPC and the work they’re doing to address this. At the NYTZF this weekend, I’ll be looking for the young people, maybe a little lost, and just happy to have found the place. —Naomi Huffman, Digital Director, MCD

Some very good zines and periodicals:

“With A Light Touch of Mango” by Natalya Balnova

Clubhouse 11 by TxtBooks and Colorama

“How to Make This Very Zine” by Anne Elizabeth Moore