Folding a city in half 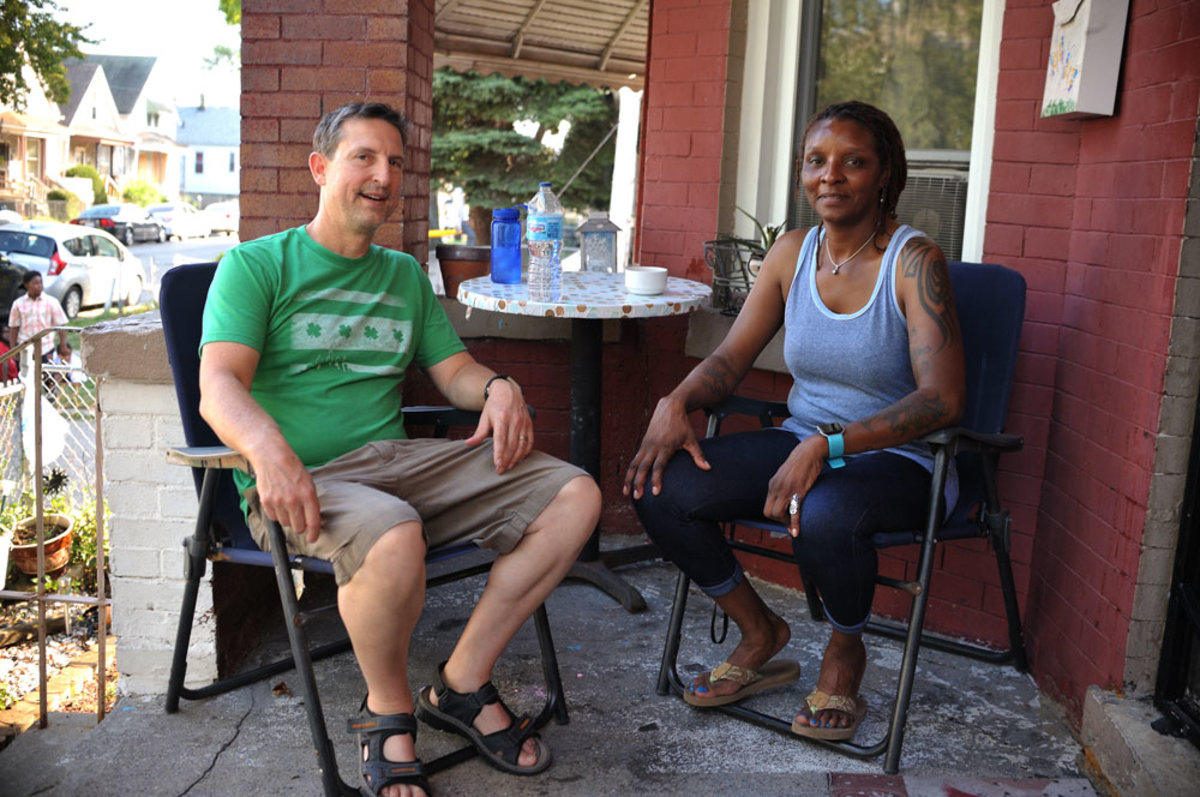 Artist and activist Tonika Johnson’s project “The Folded Map” uses Chicago’s urban grid to expose disparity in the conditions of everyday life on the city’s north and south sides. It’s also an opportunity to see the complexities of systemic segregation through someone else’s eyes.

Johnson shot her first photographs of Englewood, the neighborhood where she lives on Chicago’s south side, with black and white film; it was 1993. She didn’t like the way the photographs turned out. The gray tones made the images seem severe and didn’t adequately represent her community. “I didn’t like how stark everything seemed,” she said. She was a teenager at the time and attended high school at Lane Tech College Prep, located in the much more affluent Roscoe Village on the city’s north side. Daily, while commuting between school and home, she witnessed the conspicuous inequities between the two neighborhoods. Roscoe Village was manicured parks, busy restaurants, and bustling storefronts; Engelwood had a lot of vacant lots and boarded-up homes: “I never forgot it.”

Johnson went to art school and earned an MBA, and in 2005 co-founded RAGE (Resident Association of Greater Englewood), where she now works as Program Director. In 2017, she helped establish Englewood Rising, a community-driven marketing campaign that aims to positively influence local business and culture. Chicago magazine named her to its annual Chicagoans of the Year list the same year.

Also in 2017, Johnson won a fellowship with the organization City Bureau, which provided her with the resources to focus on a project she’d been considering for a long time. Johnson wanted to bring together Chicago residents living on the same numbered block on the north and south sides. She called the project “The Folded Map”. Participants, or “map twins,” visit each other’s homes, meet each other’s families, and discuss the similarities and differences about their lives and communities. Johnson photographs each pair and films their conversations. The resulting images and clips are incredibly moving; empathy and understanding emerge as tools for countering historically systemic racism while also underlining its urgency.

As a form of storytelling, maps are rich with potential. We primarily think of them as resources for viewing data: the size and scale of a field; the distance between a set of points; the conditions that form patterns and cause disruption; singularities, populations, absence. But this data is useless without interpretation, deduction, and conclusion—the stuff of narrative. Essential to viewing a map is orienting yourself within it.

This past summer, Johnson’s photographs and videos were exhibited at Loyola University Museum of Art (LUMA), and she raised over $20,000 with a Kickstarter campaign✺ to fund a permanent interactive website. “I want all Chicagoans to be able to find and meet their map twins,” Johnson said. —Naomi Huffman, Digital Director, MCD

✺ While Johnson’s Kickstarter was a success, projects like “The Folded Map” take a lot of resources to sustain. If you can donate money or resources, get in touch with Tonika Johnson with this form.

“A Map of Every Building in America,” The New York Times