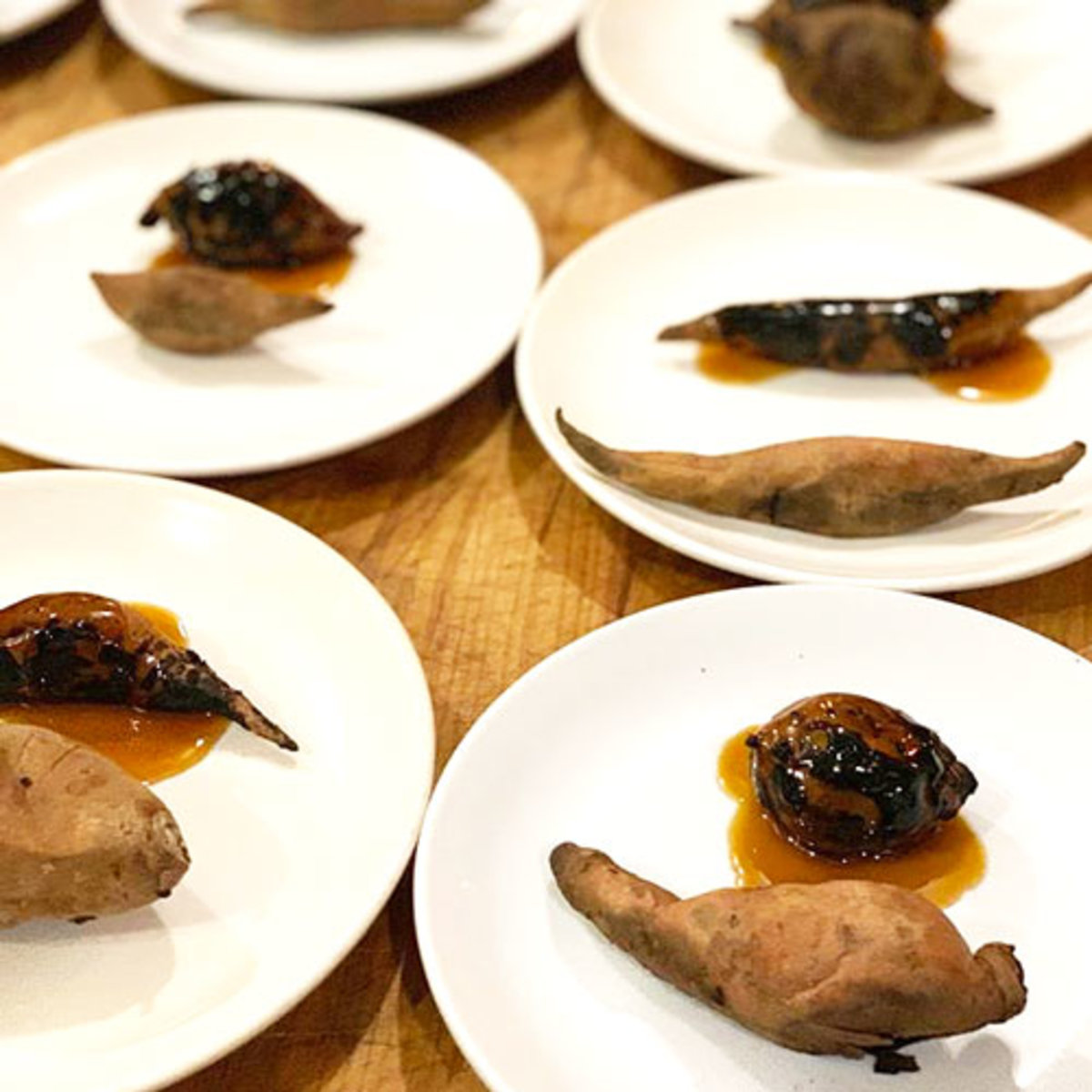 A new generation of chefs thrives on underground and experimental dining experiences. Chef Omar Tate’s dinner series “Honeysuckle: A Black Heritage Pop-Up” is one example of the innovative ways chefs are putting food—and stories—on the table.

Tate recently held a Honeysuckle dinner in Brooklyn, and I was lucky enough to attend. Throughout an eight-course menu, the dinner explored the idea of food as a vehicle for history and an occasion for sharing stories that often go overlooked. Every aspect of the dinner was informed by the Black experience in America—an approach Chef Omar calls “Black Heritage Cooking”—highlighting the ways in which farming is crucial to that experience, and the ways in which Black cuisine is often underrepresented in farm-to-table dining.

Chef Omar has spent the last ten years in the restaurant business cooking in some of the best restaurants in New York City and Philadelphia, including A Voce, Fork, Meadowsweet, Runner and Stone, and Russet. His work as a chef and writer aims to addresses the lack of diversity and representation of African Americans both in the kitchen and on the plate.

The dinner was held in a cozy, industrial space in East Williamsburg called Fitzcarraldo Projects. Between courses, Tate spoke to a room of roughly thirty guests about the food—which was exquisite—and about what the ingredients and recipes mean to him. He also cited his inspiration for each dish. The yams in his “Cart of Yams” (inspired by Ralph Ellison’s Invisible Man), for example, were from a South Carolina farm owned by the family of Dr. Howard Conyers, whose father was a mentor to Tate. “Clorindy, for Dunbar,” a beef tartare dish, was inspired by Tate’s affection for poet Paul Laurence Dunbar and his 1898 Vaudeville play Clorindy, the first theater production to feature an all-Black cast. Dunbar and composer Will Marion Cook are said to have conceptualized the play over a dinner of raw steak, chopped bell peppers and onions, and a few beers. Dessert was bean pie topped with a coffee whipped cream—a throwback to Tate’s upbringing in the Nation of Islam—and honeysuckle ice cream.

My fellow dinner guests were a varied array of young, passionate creatives and activists. I discussed the role of public education, public discourse, and coalition-building with a human rights attorney and co-founder of Adalah Justice Project, and about the illusory comforts of Latinidad with an Afro-Latinx photographer from Brooklyn. From the carefully planned menu to the guest list to the presentation, Honeysuckle is a dinner series informed by many disciplines designed to examine the lives of marginalized people

There were other chefs in attendance at Honeysuckle. Working behind the line was Kurt Evans, whose End Mass Incarceration (EMI) dinner series aims to make the problem of mass incarceration a household conversation. Nigerian-born Tunde Wey was also at the table; his Blackness in America series explores race from the Black perspective. Chefs like Tate, Evans, and Wey are forging a new paradigm for chefs with a passion for narrative. Their work as chefs, writers, and activists is informed by a new media landscape, but rooted in old world traditions. —Danny Vazquez, Assitant Editor, MCD