Reinterpreting sexual assault in "The Changeling" 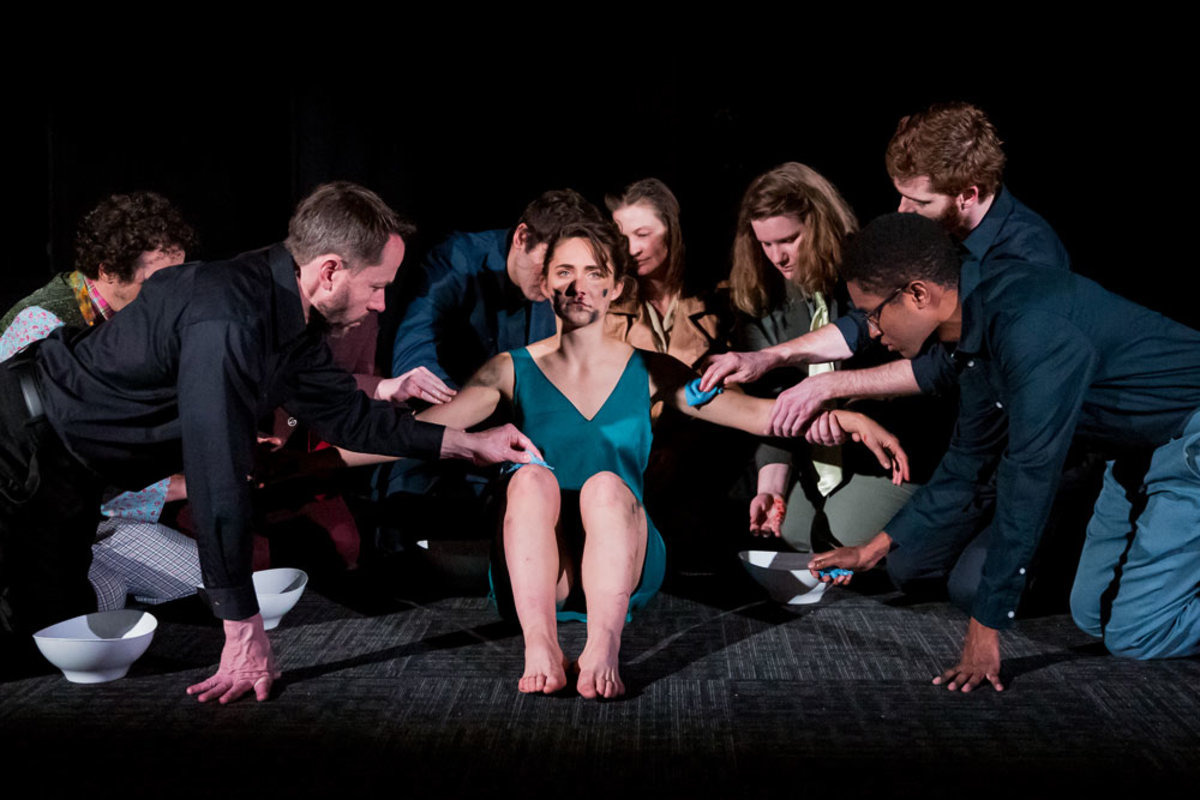 The actors sit in a circle around her. With washrags, they gently remove the mud from her arms and legs; she stands and wipes the handprint from her face. It was an arresting scene from the epilogue of a new production of the 17th-century tragedy The Changeling, staged at Brave Spirits Theatre Company in Alexandria, VA, last fall.

The play’s central character Beatrice Joanna (Danielle Scott) is a noblewoman engaged to one man and in love with another. When her lover threatens to duel her fiancé, she enlists a servant named De Flores (Musa Gurnis) to murder her fiancé. But after carrying out the murder, De Flores refuses payment and forcibly takes Beatrice-Joanna’s virginity instead. In the original play, which was written by two men, and previous contemporary productions, usually directed by men, this scene has not been portrayed as a rape. The play customarily ends with a small group of men standing over Beatrice Joanna’s limp body without a trace of grief or remorse.

Charlene Smith, director of Brave Spirits Theatre’s production of The Changeling, had some changes in mind. “On day one of the rehearsal process, I told the actors that the script they had was not how the show was going to end,” said Smith. Certainly, part of Smith’s decision to stage the play came from living through what has been a very difficult time for women in this country. The Changeling opened just three weeks after Christine Blasey Ford testified during the Senate Judiciary Committee hearings for Brett Kavanaugh’s Supreme Court nomination. “As artists we were choosing to actively grapple with wounds that were being opened in our day-to-day lives,” Smith said. “The epilogue subconsciously came out of the need to restore dignity to a woman who has been assaulted.”

Smith also chose to cast a woman, Musa Gurnis, in the role of De Flores. “I suspect that some men performing the role find themselves wanting to apologize for it, women perhaps are more able to accept and acknowledge that level of cruelty because many of us have experienced it firsthand,” Smith explained. She wanted to stage a production that examined how De Flores employed abuse and manipulation in his assault of Beatrice Joanna. She also wanted to expose De Flores’s cruelty without subjecting the audience—or the actors—to extreme or sensationalized violence.

The result was brilliantly crafted and harrowing to watch: after a violent chase scene, De Flores removed Beatrice Joanna’s dress, grabbed her, and clasped his hand over her mouth. “Let this silence thee,” he said. When he removed his hand from her mouth, it was marked by a muddy hand print. De Flores smeared Beatrice Joanna’s arms and legs with more mud and left her in the corner of the stage. The discarded dress then became a puppet of the woman; in a viscerally disturbing gesture, De Flores thrust his arm into the sleeve to mime his violation of her. In the following scene, during Beatrice Joanna’s wedding to her lover Alsemero, the actress remained upstage, wearing only a slip, her limbs still muddied, while her father manipulated the empty dress.

Brave New Spirits’ staging of The Changeling is a compassionate approach to theater, with a reparative update to an epilogue that was overdue for it. It is also a reminder of the potential for storytelling to suggest ways forward for reckoning with the crimes and hypocrisies of the past and of our own era. —Lydia Zoells, Editorial Assistant, MCD × FSG