The history of gaming, for sale on East 6th Street 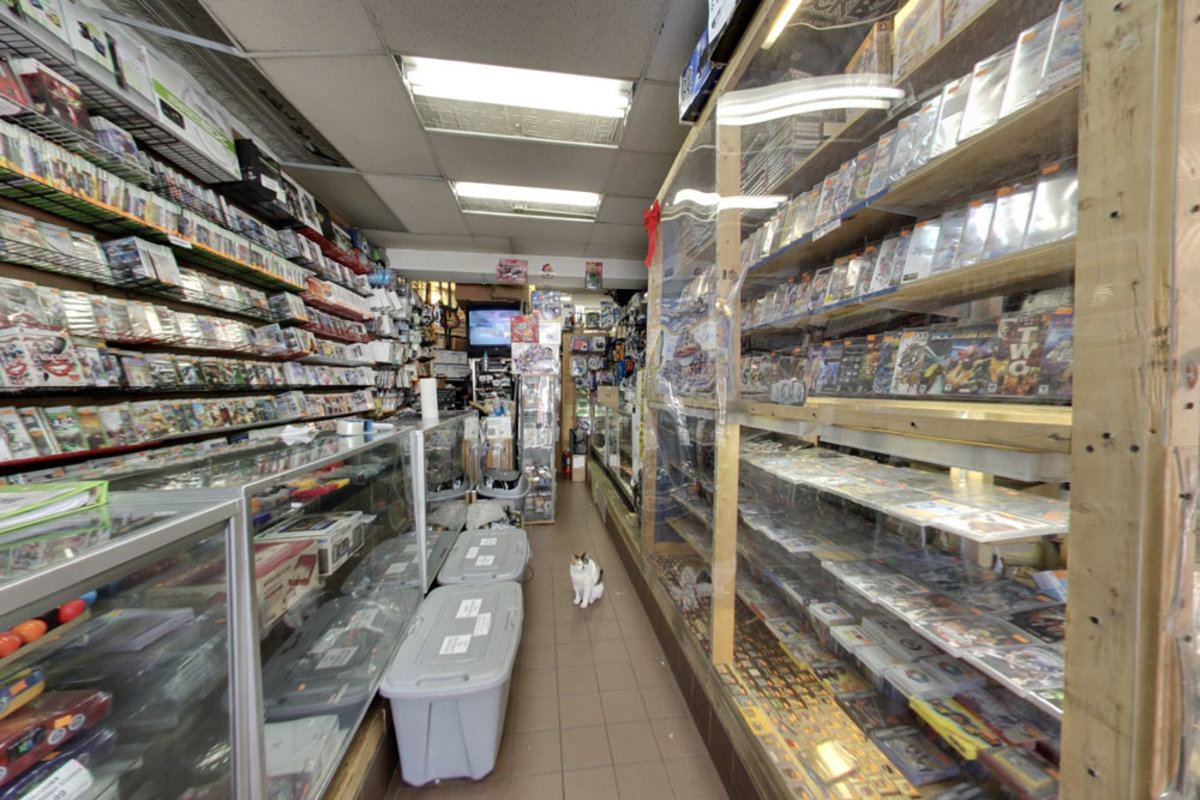 I walked by the same video game store on East 6th Street for five and a half years. I saw it blanketed in snow, glowing fluorescent against the surprisingly quiet street. I passed it on a few rainy nights, walking quickly because I didn’t have an umbrella. In a real sense the place was intangible to me, a flavor of opaque, even though I was pretty sure what was inside. I was wrong.

Videogamesnewyork, the store on East 6th, has been around in its current iteration since 2006, and had a home on St. Marks before that. It’s a tiny space, the size of a few coffee carts, and the rows are crammed with games from every era before the present one. On my first visit, there were Famicoms, the original Nintendo system, dressed in bold red and white; like-new boxed Sega Dreamcasts, the last console ever produced by Sega, whose failure predicted the future of the medium; there was a Pokémon game, unopened and in mint condition, priced at $349.99. A bored attendant kept watch over one other customer, my friend, and me, marveling. I felt alone with these objects, the games and consoles I’d coveted since I was a kid, when my parents refused to allow them in the house. (It seems to me that early refusal creates lasting desire.)

The history of gaming, like anything else, is a collection of failures. What doesn’t work is often more daring than what does, because consumer preferences at scale mean that only the most average things are produced. And when your product costs millions to make, it becomes sensible to hedge your bets. But at Videogamesnewyork the past hasn’t been replaced or upgraded to a new model; I’d call it a shrine, but unlike many holy places this one still functions according to its original purpose.

Consequences are a component of games of any kind: if you leave your queen unguarded, your opponent will steal her; if you stop paying attention to the distribution of resources in Settlers of Catan, your friends will earn Longest Road and Largest Army before you have a chance. The same is true of the gaming industry: games are rarely both artistically and commercially viable—boundary-breaking art is rarely appreciated in its own time—and there are consequences for missing the mark. Like obsolescence.

What’s interesting to me about failed games and systems is how they are fetishized by collectors and nostalgia hounds, whose fervent collecting is a form of archiving. Many games have gained a cult-like notoriety in this way; for a long time, collectors claimed Atari had buried thousands of game cartridges and pieces of hardware somewhere in the New Mexico desert. Supposedly, there were millions of unopened copies of E.T.—widely held to be one of the worst games ever made—crushed and encased in a concrete tomb. A 2014 excavation proved they were indeed there. Some of the games were archived in museum collections; the others were auctioned off to raise enough money with the goal of transforming the site into a tourist attraction.

This was shortly after the game industry crash of ’83, when market saturation of hardware and cartridges caused revenues to drop nearly 97-percent in two years. The booming early days were over; the honeymoon had ended. Since then, the industry has professionalized. Now there’s a chasm between the corporate giants and the independent developers working out of their garages and bedrooms. At corporations like Nintendo, Activision, and Sony, industry-standard contracts keep a close guard on intellectual property, and innovation feels less possible. Things are slightly less bleak at independents like Panache Digital, Compulsion, and Phoenix Labs, if only because they’ve committed to a labor of love in exchange for meager institutional support. To me, it seems like an inflection point for the industry, a fast-approaching midlife crisis.

The store on East 6th is a monument to the complexities of gaming’s past: all of the forgotten growing pains, written in plastic and circuits and prose, are still there for anyone who’s curious enough to go look for them. The first time I visited, I walked out before I spent money I didn’t have. The place is a business, after all, and what good is a customer who’s only looking? —Bijan Stephen (@bijanstephen)