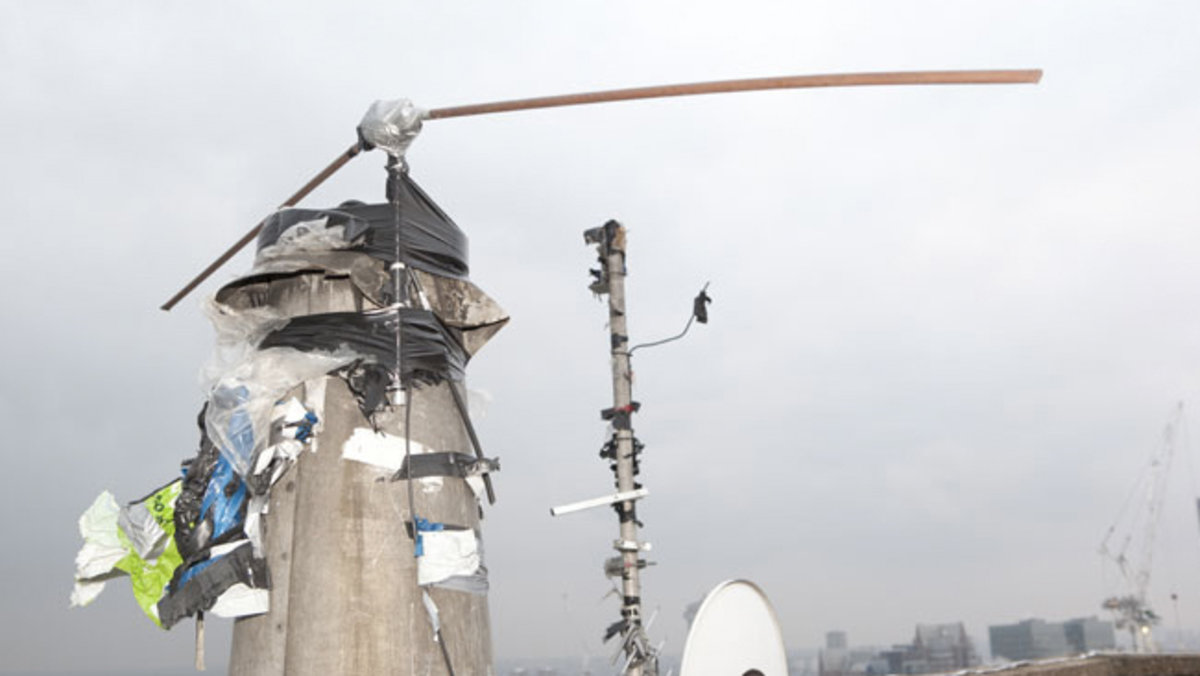 It’s way past midnight and I’m crammed into the back seat of a small car we’ve hotboxed with ganja smoke. Tinny, distorted music rolls out of the car’s flimsy speakers. It’s jungle. The signal, too, is weak, and the music is drowned out by the white noise of a failing analogue radio transmission.

And then we’re rising as the car rounds the concrete spiral of a motorway overpass, escaping the damp, crumbling, claustrophobic streets below. I’m in my early twenties. I gaze out of the window, and at that second the music cuts to full FM clarity: the rattling snares and hi-hats are razor sharp, the bass line rumbles through the car, and an MC chats over it all in some mash-up of cockney and Jamaican slang. Through the windows the wall of a brutalist tower rises around us, and I realize why the music has snapped into place: up here there’s a direct line of sight. The illicit transmission of some pirate broadcaster beams from some hidden place, perched on top of the city.

As vivid and precise as this memory seems to me now, it’s a collage of different instances and events colliding with three decades of nostalgia. It was almost certainly a Saturday night, and my friends and I were heading toward a deserted industrial estate in search of a warehouse party. We’d scribbled down a phone number the MC had read over the air, called it from a phone box, and then scribbled down the address that had been recited by the recorded message on the other end. None of us had cell phones, GPS, or Google Maps. Instead we squinted at the smudged black lines in a worn copy of the A-Z of London, the paperback map that every car owner in the metropolis stowed in their glove compartment in the mid-90s, in order to work out where the hell we were.

If you say the words “pirate radio” to most people outside of the UK’s major cities the first thing that probably springs to mind is a romanticized image of the 1960s, as portrayed in the movie The Boat That Rocked: heroic pioneer DJs living in cramped boats anchored in international waters off the coast of England, beaming early rock and roll into a country where the state-owned radio stations hadn’t yet got hip. Often funded by US music producers and labels, it was in some ways the first of the endless assaults that would eventually drown Europe in American pop culture for decades. As exciting as that time must have been, it was relatively short-lived; it was impossible for the BBC and the new emerging commercial radio stations to ignore US rock and pop or the explosion of homegrown music that followed the success of The Beatles. The pirates faded away, and the cultural movement they’d help spawn was absorbed into the mainstream.

Twenty years later, the airwaves of the 80s were clogged with generic pop and power rock, almost all of it painfully white. The growing diaspora populations of inner-city London had no radio of their own, and apart from the records that they imported themselves, no way of listening to the reggae and calypso that was such a vital part of their cultures. No sense of transmitted community. Once again, out of necessity, they turned to pirate radio. But instead of boats they took to the roofs of their own buildings, scaling the concrete cliffs of London’s iconic social housing estates to find perches for their makeshift transmitters. The higher, the better, because the signal could reach further. By the 90s much of the reggae had given way to hip hop imported from New York, acid house from Chicago, and techno from Detroit. The homegrown sounds of hardcore rave, breakbeat, and jungle quickly followed, both recorded in and transmitted from cheap bedroom studios. New stations kept appearing until it felt like every nudge of the dial would reveal a new one. The frequencies jammed.

At the time it felt like being part of a revolution—an uprising against a dominant, decrepit musical hegemony, fought not just on the airwaves but in the alleyways, corridors, and stairwells of the housing estates as the pirates played cat-and-mouse with the authorities, who were set on shutting down their illegal broadcast. It’s here again that the architecture of the social housing projects gave the pirates an advantage. According to Dr. Larisa Mann (DJ Ripley), it wasn’t just their height that worked in their favor. The sheer density of the housing and the complexity of street layouts inside the estates made it incredibly hard for the police and licensing authorities to triangulate where a signal might be coming from. Plus, these were areas where the police usually never tread unless they had to, where they were viewed by the residents as oppressors. Any attempt to interfere with the broadcast would be seen as an attack on the community as a whole, a flashpoint waiting to happen.

Nothing lasts forever. The pirates started to disappear. Some of the larger stations, like Kiss FM and Rinse FM, eventually earned their own licenses to broadcast and became fledgling media empires of their own. The BBC eventually caught up by the turn of the century and began devoting hours of airtime to the same music the pirates were playing. And, of course, the arrival of the internet granted anyone with a connection the ability to broadcast to the world, far beyond their neighborhoods and communities.

But neighborhoods and communities are still important, and there are always gaps and niches that need to be filled. A recent study showed that there are as many as eighty pirate stations operating in London, filling the needs and wants of the city’s ever shifting immigrant populations. Even as the tower blocks have been renovated and gentrified, shifting the general perception of them as vertical slums to desirable real estate, their displaced residents are still tuning in to the analogue transmissions, scanning the frequencies for the sounds they call home. —Tim Maughan, author of Infinite Detail (@timmaughan)