Yelaine Rodriguez rewrites the story of the African diaspora 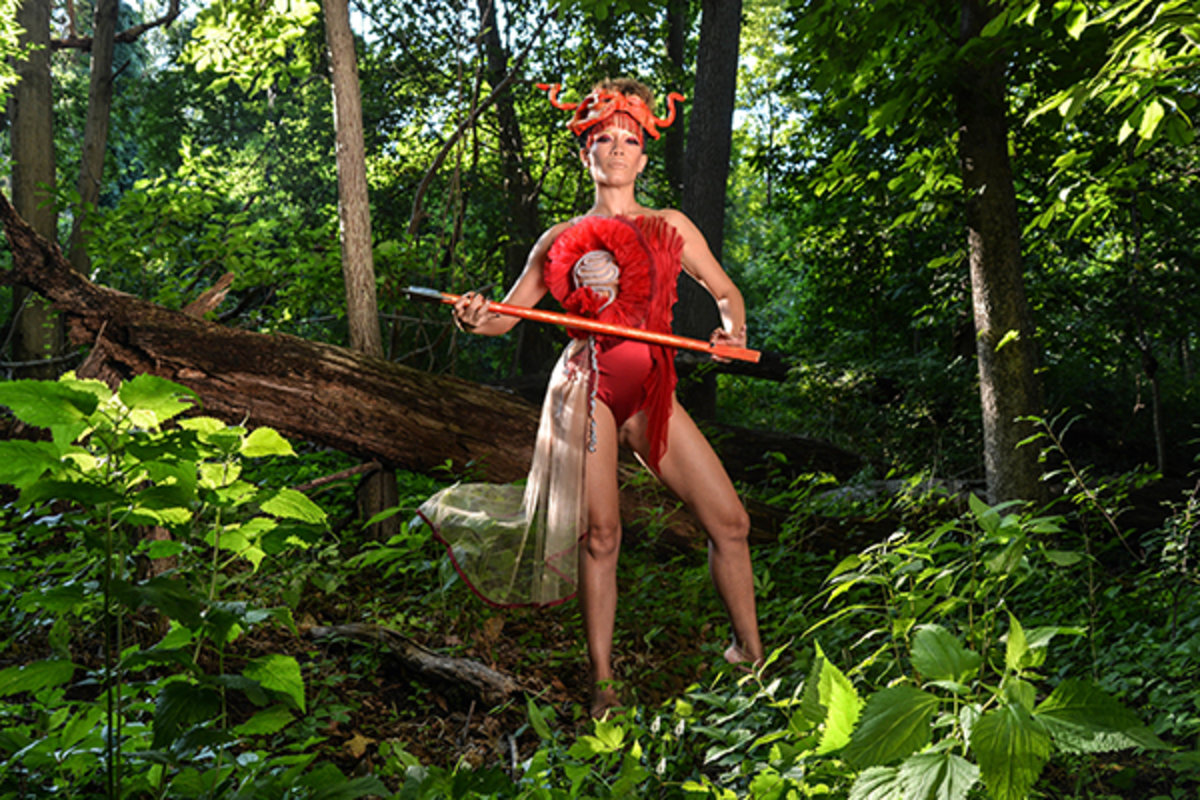 I’m in East Harlem, transfixed by the image of a brown-skinned woman in a red leotard. Over her left breast, red tulle blooms around what appears to be exposed entrails. Her eyeshadow and the horned mask atop her head are of the same brilliant red. She stands barefoot in the woods, an axe gripped daintily in her hands. She is Shango.

Shango calls to mind, for me, the people who originally inhabited the land where my mother was born. The Taínos are long gone, their religion forgotten, their descendants shaped by colonialism, Catholicism, and the Yoruba culture and customs of the slaves with whom they were almost entirely replaced. That’s how Shango got to East Harlem.

The image of Shango was shot by video/film production artist Melanie Gonzalez, the leotard and mask were designed by Yelaine Rodriguez, an interdisciplinary artist and self-identified Afro-Caribbean woman born and raised in the Bronx. Yelaine’s work explores the experiences of women of color within, specifically, Dominican and Haitian diasporic communities. I visited her in her studio space, where she was busy designing dresses and head wraps inspired by a distinct set of influences, including Ezili Dantor and the Orisha, the art of Catholic iconography, and transatlantic slave narratives, and listened while Yelaine explained what compels her work: “Negative portrayals of the African diaspora have been prevalent throughout history. I wish to dismantle those false narratives by retelling those stories in a positive light, as they should have been told in the first place.” She cited Voodoo and Santeria, two similar religions found in various forms throughout the Caribbean. “These religions have long carried negative connotations. However, in my work, I aspire to highlight the beauty of these religions, telling the story of the Orishas and Loas through wearable art and performances.”

In 2016, Yelaine founded “Living in My Skin” a hybrid encounter with art, culture, and politics. Part art exhibit, part open forum, it showcased poetry and visual art by a mélange of artists and performers who represent both ends of the island of Hispaniola—a sort of symposium on the subject of Dominican-Haitian relations. The collected works and panel discussions challenge societal norms informed by a colonial mentality, deconstruct the internalized oppression caused by white supremacy, and restore and celebrate communities at the intersection of Blackness and Latinidad. It’s no small endeavor, but Yelaine and her coterie of creatives take the challenge head on.

The second iteration of “Living in My Skin” was held late last year with the collaboration of poet Maria Fernanda Snellings at the Caribbean Cultural Center African Diaspora Institute (CCCADI) in East Harlem. A poem from Gabriel Ramirez about fatherly love brought me to tears. Another from Jennifer Celestin brought a roomful of attendees to fits of deep belly laughs. The event was a comfort. It seemed everyone in attendance had long accepted the central presupposition of Afro-Latinidad—that Blackness and Latinidad are not mutually exclusive concepts. By engaging in a discourse about race, gender, and colorism in modern-day Dominican Republic, Haiti, and the diaspora, both the participants and attendees of  “Living in My Skin” work toward the same end—a deconstruction of the boundary between Latinidad and Blackness, a re-writing of a false history.

Yelaine and I recently corresponded over email about her work. Our edited exchange is below.

What are some of the themes that appear in your art? Race, identity, religion, traditions, the experience of Blackness, history, movements of resistance, family, gender roles. As an Afro-Dominican American artist with an interfaith and inter-country personal narrative, my work is inspired by the shared experiences of the African diasporic community, the island of Hispaniola and Black cultures throughout the United States and the Caribbean. My research on the syncretic religions found in these communities, the troubled history, as well as gender roles they maintain in order heavily informs my work. These themes are connected to my family history and personal interests—a reflection of how I see my work as an extension of my self.

How did you decide to tell these stories? I grew up in the Bronx with little knowledge of the history of the Dominican Republic and Haiti. After graduating from college, I wanted to learn more. So, I took a trip on my own to do some research. I felt cheated by my education in the States and sought a re-education among artists and friends. I always felt that I could have had more positive images of women of color in my upbringing, and saw an opportunity to do just that via my art practice. I graduated from Parsons with a BFA in fashion design. While fashion, as a career, is often portrayed or perceived as vain, I realized I could use the tools I acquired in school for my benefit and for the benefit of my community. I wanted to shed light on the amazing contributions of Black cultures from both the Caribbean and the States in my art practice, so I used their stories to recreate their histories. I wanted to share them with others that might not be as familiar with those stories.

How did you decide on this medium? I come from a household full of creatives. I was the last child of four and very observant. I wanted to work in the arts, but I also wanted to do something different from my siblings. They all took up illustration as their major, so I decided to go into fashion. I like working with the body, because once a piece is worn by someone with personality and charisma it completely transforms. I like collaborating with people and seeing how they interpret my work. Wearable art is not a practice that many artists use, but it’s a unique form that allows you to work closely with others.

Who are some of the visual artists you’d say influence your work? It’s all over the place, honestly. I find that my influences come mostly from movements throughout history and iconic figures. Salvador and Egon Schiele are influential to me; I like how unusual their work is, the strange yet familiar figures in their work. I also like Kara Walker’s simple yet strong narrative, as well as Renee Cox’s photography and how she uses her own body as art.

Who are some of the artists working in the same medium and/or others that you’d count as contemporaries? Fabiola Jean Louis is another artist doing really great work using fashion and live models for her photography series “RE-WRITING HISTORY: A Black Ancestral Narrative” (a performance of that work will be held at Andrew Freedman Home on April 26th, 2019). She makes paper sculpture dresses, but the photographs look like paintings. Also, Kehinde Wiley, who bases his paintings on photographs, placing Black bodies in paintings by the masters who only used white subjects. I also take inspiration from Yinka Shonibare’s installations of historical paintings with African textiles. All these artists pull from a history that excluded Black people from the picture. They are recreating histories, placing Black people in the proper context.

Who are some of the writers you’d say influence your work? Maya Angelou, Zora Neale Hurston, Yulia Alvarez, Edwidge Danticat, Esmeralda Santiago— I can keep going. I have had strong female voices in my ear since I was a kid.

What effect do you hope for your work to have? I hope these pieces can start conversations around race and identity. To break away from negative stereotypes surrounding these religions and traditions. To influence people to do more research on the Afro-Caribbean cultures and their contributions to our world. To feel empowered by seeing these images of women of color being fierce, strong, and resistant.