How can you tell me that it's asking too much to allow me to be a human being? 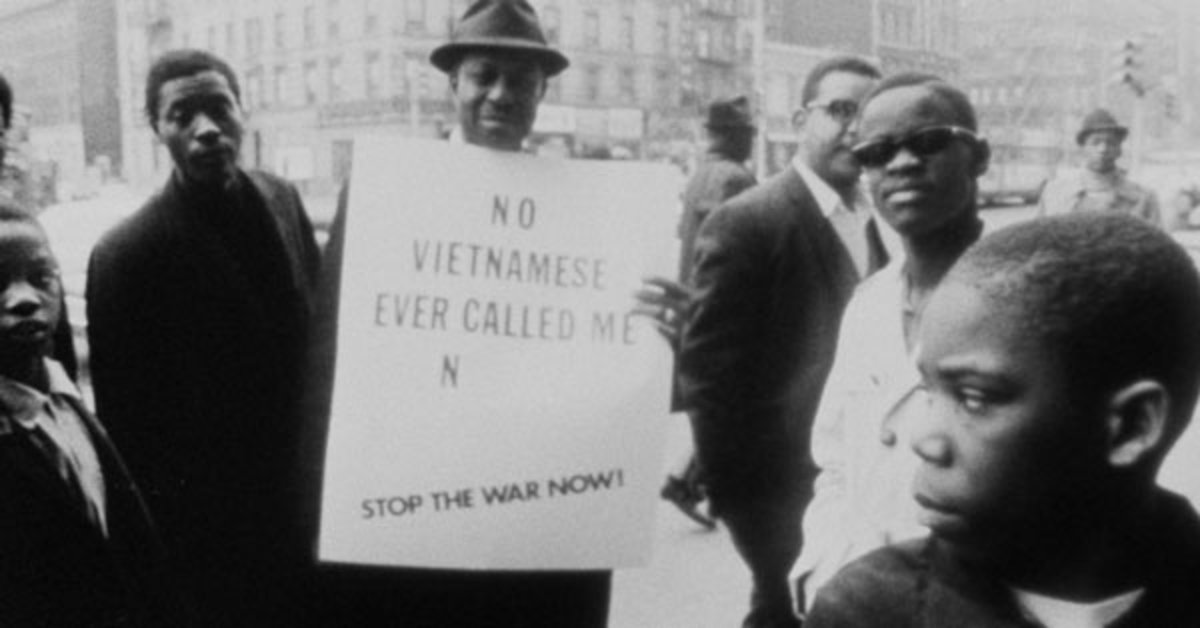 No Vietnamese Ever Called Me N***** opens with a Black man being interviewed about his experience fighting in the Vietnam War.

Young and earnest, just back from Vietnam, he’s the first subject in a series of interviews that comprise the film, directed by labor organizer David Weiss and shot in New York City on April 15, 1967, during a march organized by the Spring Mobilization Committee to End the War in Vietnam. That day, 400,000 protesters marched from Harlem to the United Nations to protest the United States’ continued involvement in the Vietnam War. I recently viewed a screening of the documentary at the Museum of the City of New York.

Early in the film, the unnamed soldier remembers a conversation he had with a white soldier while in Vietnam: he mentioned that he expected to return home to rats and roaches; the white soldier did not have the same concerns. In that moment, the Black soldier realized America would not keep all its promises. At the time, the consequences of America’s deep-seated racism were suffered in the suppression of voting rights, the practice of red-lining, the recent bombing by white supremacists of the 16th Street Baptist Church in Birmingham which killed four young Black girls, and the assassination of Black civil rights activists like Medger Evers. No, the United States would not welcome this young soldier home with open arms.

The second interview subject is another young Black man just back from the war; he speaks with a stutter. He’s being interviewed in the same room as the first man; they’re the most significant voices in the film. The second subject reveals how, upon hearing the news of the civil rights activists who’d been murdered while he was away fighting for his country, he became radicalized. “I was tired of being in a white school, hearing lies,” he says. “To me, my uniform and flag don’t mean a damn thing now.”

Another set of interviews occurs on the streets of Harlem on the day of the march. Subjects include protestors, counter-protestors, and spectators. There’s a pair of interviews with two women who have sons in the war. In a group of five percenters, one says, “America needs its face cleaned first . . . The best and brightest young Black men are out on the battlefield; it’s only the worst of the white youth (and) the racist kid from Mississippi fighting this war against people of another color.” Later, a loud, white counter-protester with a Bensonhurst accent shouts, “Even if my country is wrong, I’m behind my country!” as he complains about the mostly Black protestors. “Well, I’d like to see everyone get along,” says an elderly Jewish woman. “If I had a plane and a bomb, I’d bomb Vietnam,” says a young white man wearing a swastika. Weiss deliberately laced the film with these juxtapositions, relying on contrast to communicate vastly different points of view.

No Vietnamese Ever Called Me N***** is worth watching simply for the undeniable contemporary political and cultural relevance; America has abandoned our young Black men in the fight to end police brutality, mandatory minimum sentencing, and systemic racism in professional sports, among other ongoing battles. But one of the most interesting aspects of the film is watching racism bear out in its very production. The white film crew often ask provocative and leading questions; in turn, many of the Harlemite interview subjects express a deep distrust for their interviewers. The interviewees’ anger and suspicions are well-placed; the documentarians likely mean well, but they do little to put their subjects at ease, and are seemingly unaware that the consequences for being involved in the project are steeper for the subjects.

The young soldier from the opening scene also closes the film. He says, “You’re sick . . . how can you tell me that it’s asking too much to allow me to be a human being?” Though he’s speaking to the interviewer, it’s unclear who he is actually addressing. He doesn’t seem to be concerned with who his audience is at all; or maybe he’s speaking to everyone, all of us, even now. —Danny Vazquez, Assistant Editor, MCD×FSG