Pop-Up Magazine and the rise of the live storytelling show 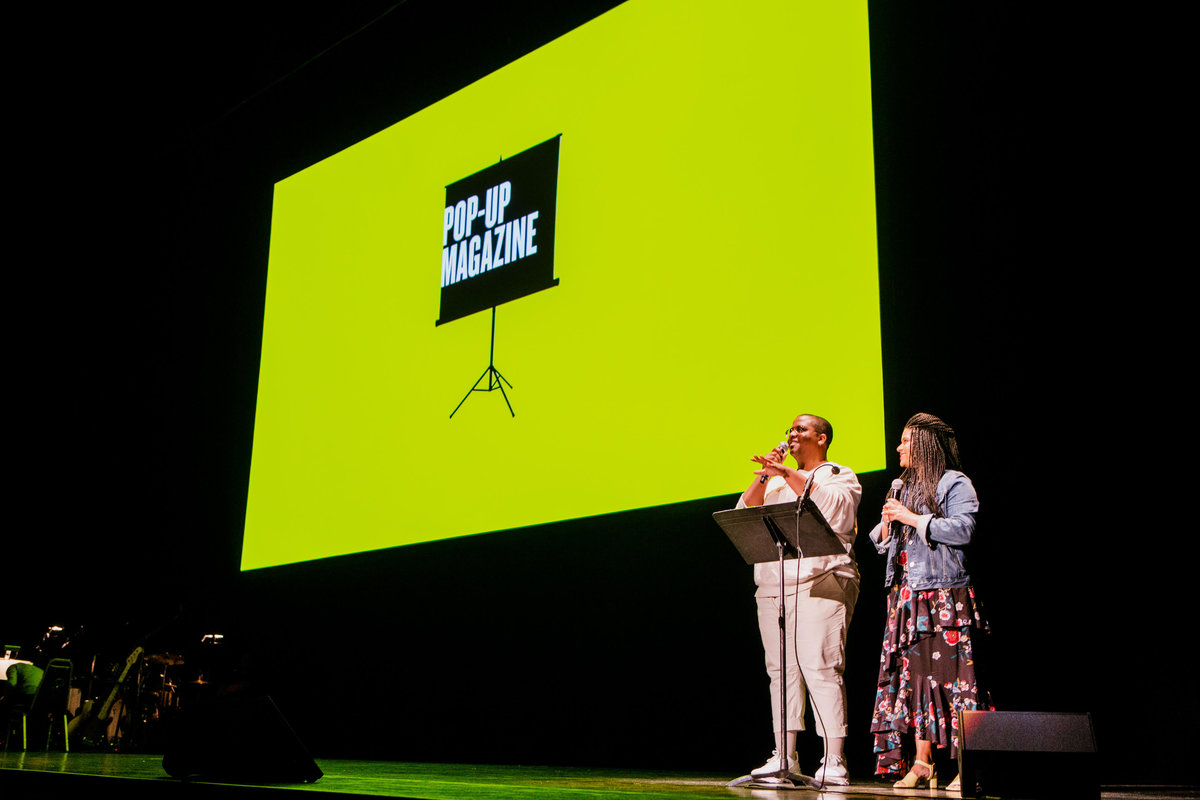 A crowd of people bottlenecked at the door to the theatre; the atmosphere in the lobby was buzzy and loud, like the anticipation before a sold-out concert. “Whoa,” I said to my friend. “You think this show is good?” A woman in front of us turned around. “It’s amazing. This is my sixth time seeing it.”

It was February, and we were at Pop-Up Magazine’s Winter Issue at BAM Theatre in Brooklyn. We took our seats, the lights dimmed, and over the next 100 minutes, we listened as a dozen people — writers, documentarians, musicians, visual artists, mothers, granddaughters, friends — told personal stories about their lived experiences. Josie Duffy Rice, a lawyer and podcast host, described the particular displeasures of being a picky eater, and the hope she has that her son won’t inherit her condition. Arcade Fire’s Will Butler cited his grandfather’s legacy as a pioneer bandleader as the foundation for his own music career. Artist and audio documentarian James T. Green mourned the obsolescence of ringtones. Each telling was aided by a live score by Minna Choi and the MagikMagik Orchestra and animations, video, or photographs projected on a giant screen behind the performer. The stories were comedic, tragic, and inspiring, and visibly moved the people seated around me to laughter, tears, and shouting. There was no intermission, but it wasn’t necessary; the audience was rapt. For every story.

In the past twenty-five or so years, live storytelling shows have emerged as mainstream entertainment, perhaps due to a couple of factors: the success of shows like The Moth, established in 1997; the introduction of podcasts in the early aughts, which contributed to a renewed focus on the personal essay and oral storytelling; and the cultural shift from blogging to social networking that meant the abandonment of online communities where people published diaristic work. Hung on the stakes of the first-person address, live storytelling shows skew earnest, emotional, and often confessional. Of course, they range widely in production, tone, and form: in my experience, a storytelling show is both shouting your story, without a mic, from a cleared space at the back of a cash-only bar that serves Hamm’s on tap to a few dozen standing people, and standing inside the glaring beam of a spotlight hoping the two-hundred person audience can’t see your hands shaking. I was fortunate to live in Chicago during the peak of its “live lit” phenomenon (somewhere between 2009 and 2013, depending on who you ask) when storytelling shows took over the back rooms of bars and bookstores, sold out mid-sized theaters, and landed podcast distribution deals. I used to tell people you could see a show any night of the week, and I was not exaggerating. There was the now-defunct Guts and Glory, co-produced by Sam Irby, and Quickies!, co-hosted by Lindsay Hunter. There are still the ongoing and long-running Paper Machete, Essay Fiesta, Tuesday Funk, and The Stoop; and organizations like Story Club, 2nd Story, and Write Club, which produce workshops and programming for writing and storytelling. I live in New York now, and sometimes I miss those shows.

Pop-Up Magazine hosted its first show in a small theater in San Francisco in 2009 and now routinely sells out large, multi-thousand seat venues during its tours. The show is the apex of live storytelling; more than amplifying stories, it aims to create an intimate, theatrical experience that makes you more aware of the person sitting next to you. Pop-Up’s Spring 2019 Issue is currently on tour, and tickets are still available for its nights in Seattle, Los Angeles, and D.C. I interviewed producer Aaron Edwards over email about how the show comes together each season, and where it intends to go in the future. Read our conversation at the link below. — Naomi Huffman, Digital Director, MCDxFSG

Pop-Up Magazine is ten years old! How has the show evolved over time? What are your plans to evolve the show in the near future?
Aaron Edwards: My interaction with Pop-Up started as an audience member. Since I first saw it in 2015, it’s only gotten stronger, more daring, more ambitious. I’m drawn to experimenting with format and the vehicles for telling a story. I’ve seen and worked on stories in the show that use illustrations and live animations, a choir, shadow puppetry, a glowing tent on stage, and, most recently, a Bollywood-style dance number. If anything, our plans to evolve are tied to our plans to experiment with our format. People tend to see Pop-Up more than once, just like magazine subscribers tend to read more than one copy of their favorite publication. We want to keep surprising people, delighting them, challenging them, and pushing ourselves to break the mold. I feel a similar ethos in the world of theater at large. The best productions, and the most worthwhile, take what is known about live theater and place it in a context that allows for innovation and growth. People will always have a hunger for good stories. But they won’t always want them served the same way. That’s a challenging and exciting call for us to answer.

What is the production process like for a single story, from acquiring the story through performance and production?
AE: I love trying to find potential contributors in roundabout ways, so I spend a lot of time looking at how people express themselves on Instagram Stories, for example. They’re such a great way to see how people might direct their own mini-film, which sometimes tracks pretty closely to a live story on stage. I’ve even asked people to send me old journal entries or iNote scribbles if they don’t have traditional writing clips. My goal as a producer is to encourage and unearth unexpected narratives that might lurk beneath a broad topic. But I also approach journalists and artists in more straightforward ways — asking for pitches on a theme or beat and seeing what they come back with. If we land on something good, the story gets assigned, we set deadlines, go back and forth on edits, and loop in art and music when some structure for the script starts to take shape.

How does each show take shape? How are stories arranged? How is this process similar to the tradition of print magazine making?
AE: Sitting down with a magazine is an intimate experience. Sitting down for a ninety-minute show is even moreso. So, though we take cues from magazine structures, we’re first and foremost a live production. We have “front of book” stories that might run shorter and tend to inject the show with humor. Longer features often sit in the center of the show, much like the feature well of a magazine. And just like a magazine, the show has uniquely designed ads, sometimes in the form of a super short film. It’s a show made up of many pieces, and the puzzle is to arrange them in a way that doesn’t hold the audience in any one emotion or tone for too long, and doesn’t jolt between them in a way that does a disservice to any individual piece.

Pop-Up Magazine’s shows take place across the country. How do you ensure you’re representing the concerns of each region?
AE: We definitely make a point to assign contributors from the cities we travel to. Not only do we want to avoid parachuting into a city, but we think it’s just a stronger show when it reflects the places we visit. Also I’m from there so I’m a bit biased but, anecdotally, our New York City crowds gravitate toward stories that tackle big, complicated topics like climate change, social norms, race, and culture. New York also loves to laugh. And San Francisco is the show’s city of origin, so that crowd is just a huge ball of support and energy when we kick off our tours.