For people who love text (like, really love it) 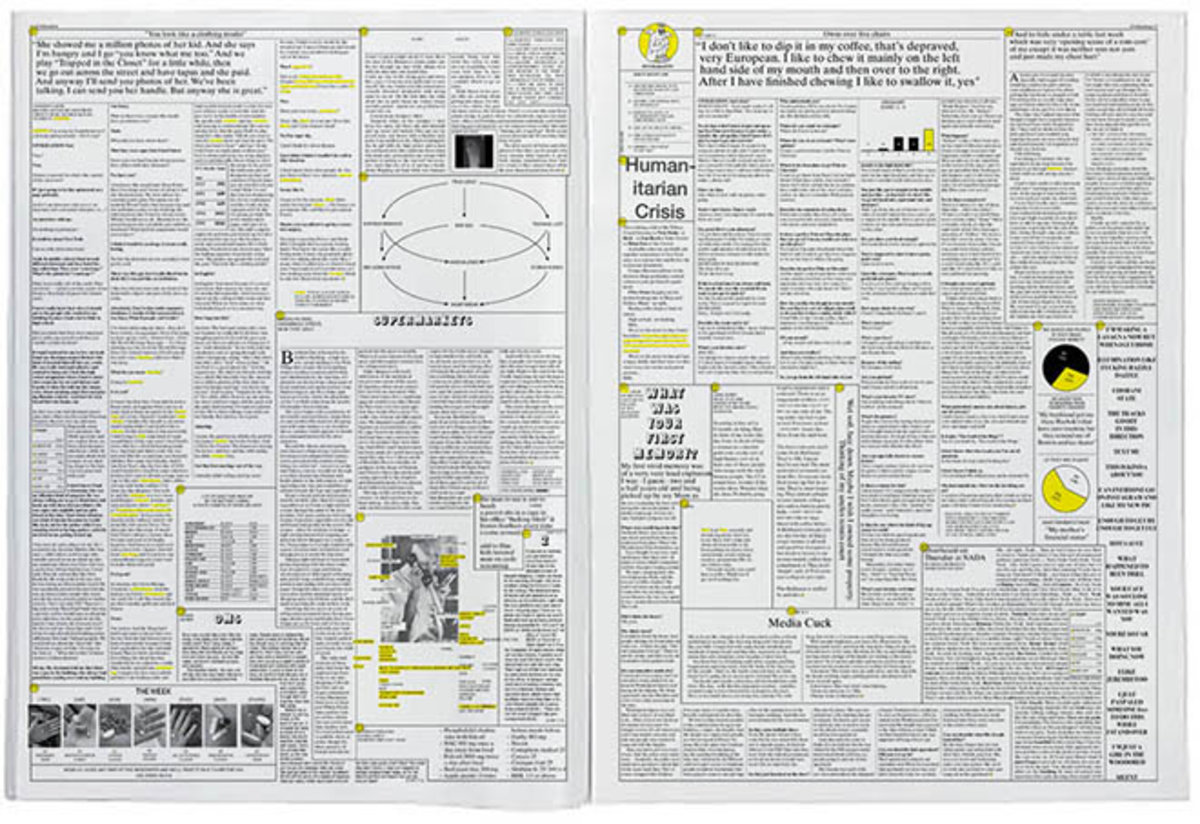 The cover of each issue of Civilization, a self-described “future history of New York,” features a bloated figure wearing sneakers and a wobbly halo, clutching its knees with clenched teeth, or smiling dopily while it reads . . . an issue of Civilization, or pouting mournfully at its own reflection. It’s an anarchist angel, or an angel only ironically. Regardless, the figure seems to understand it is the point of the joke, the sick person who made it, or even worse, not part of the joke at all: a New Yorker’s greatest fear.

Civilization was launched in 2017 by designer Richard Turley and artists Lucas Mascatello and Mia Kerin, who found themselves collectively and decidedly uninspired by contemporary American media’s agonizing backslide to sponsored content, celebrity access goss, and a culture nursed on Instagram. “I’m exhausted by pictures,” Turley said in an interview with Dazed. “I find their presence increasingly intrusive, even though I’m addicted to gazing at them . . . scrolling through them with my cold, dead thumb.”

Open up an issue of Civilization—you’ll need to utilize your full wingspan to do so, as it is the size of the olde newspapers of yore, and printed on newsprint—and you’ll immediately notice that text is the whole point. The sixteen pages comprising each issue are walled off in boxes and sliced into columns featuring first person accounts (“I collapsed with a seizure in front of a J. CREW store in the Hamptons one summer in 2010”); survey questions and answers (“Q: Favorite taste? A: “Vaped weed”); endorsements (“Puncturing the two ends of a zucchini with your brand new vegetable spiralizer, you can create a neolithic display, or an ode to your new Keto lifestyle”); daily food diaries; lists (“Hot: pitbulls, shamelessness, trip-hop; Not: fine art, empathy, hairlessness”); hanging existential questions (“What if the last thing I see before I die is a Supreme box logo?”); and lots of blocked-out redactions. The boxes and columns are interrupted with graphs, charts, illustrations, small-scale photography, and other bits and blurts—so much that I could spend days attempting to catalog it all. The pieces are funny, depressing, enlightening, stupid. Reading it is not dissimilar to the way I suspect most of us read online—gazing at one screen and then another, stuttering between several open tabs and windows—but it doesn’t leave the same residual fatigue. I only wanted to keep reading. Civilization published its third issue earlier this year. I recommend buying all three.

Civilization may aim to be a magazine for New Yorkers, but its appeal is broader than that, at least in my mind. The individual pieces assemble a chorus of voices—cynical, unhinged, irreverent, cheeky, but otherwise unremarkable, except for how closely, at times, they resemble each other—that you could encounter anywhere depressed, jaded, anxious, self-obsessed, over-stimulated people gather. And it’s 2019 in America, so that’s basically everywhere. —Naomi Huffman, Digital Director, MCD×FSG