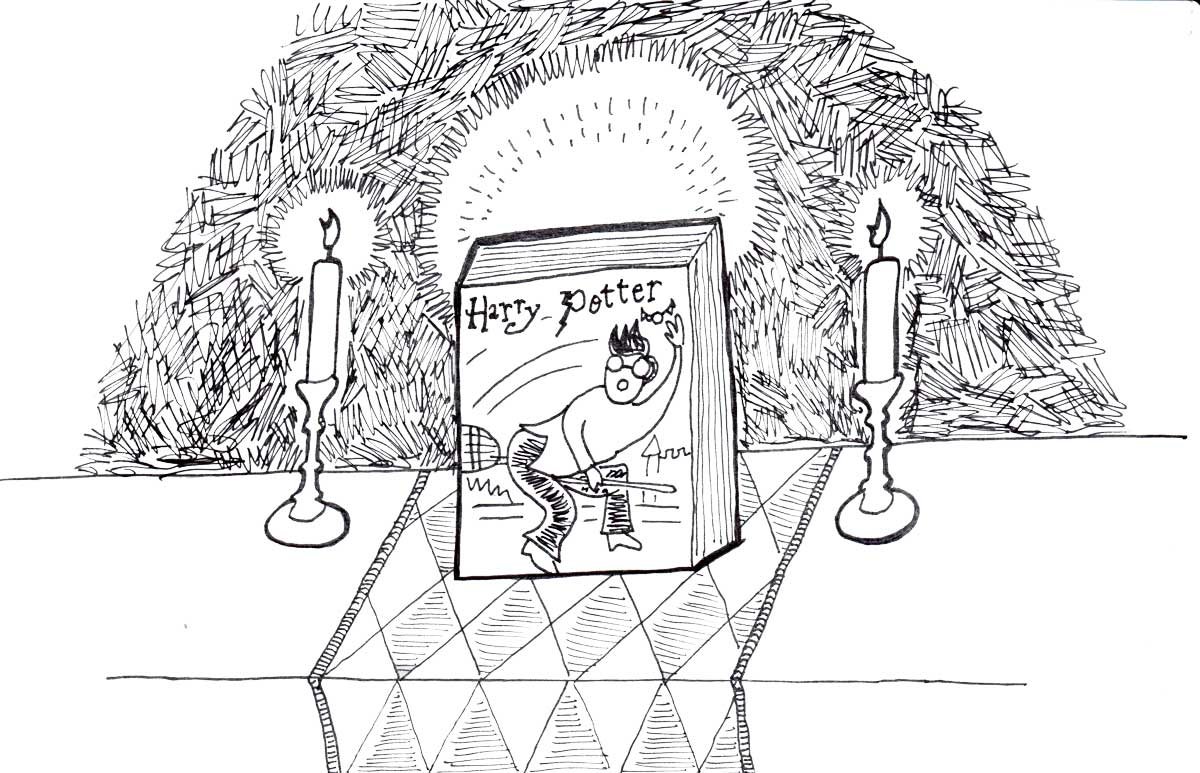 On Thursday evenings after work, I sardine myself into a crowded train. Sweat trickles down the small of my back as we hurtle under the Hudson River. Unlike other evenings, I’m not feeling trapped or stressed; I’m not thinking about what I’ll eat for dinner or an email I received during the day. On Thursdays, my headphones are in, and I’m lost in a beloved podcast, Harry Potter and the Sacred Text.

In each episode, hosts Vanessa Zoltan and Casper ter Kuile examine a single chapter from one of J.K. Rowling’s Harry Potter novels and discuss how it relates to a theme chosen in advance. They tell a story related to the theme, summarize the chapter in a thirty-second recap, and then dive into a discussion that culminates in a sacred reading practice, such as Lectio Divina, Havruta, or Florilegium. At the end, they play a voice message from a listener, and each of the hosts delivers a blessing for a character from the chapter.

Vanessa and Casper, both graduates and current staff of Harvard Divinity School, began recording Harry Potter and the Sacred Text as a weekly podcast in 2016. Neither is religious, per se—Vanessa is Jewish and an atheist, while Casper describes himself as agnostic—but they see value in the rituals of sacred reading. It’s a way of gleaning wisdom from the texts we love, and forges a connection between people who read the same text together. Harry Potter and the Sacred Text has since grown to accommodate live shows; a second podcast, The Women of Harry Potter, hosted by Vanessa and producer Ariana Nedelman; and reading groups across the U.S., as well as in Australia, Canada, Taiwan, and Europe.

Vanessa and Casper never speculate on J.K. Rowling’s intentions. They are imaginative, but in a way that is empathizing, rather than theorizing or inventing new stories. They aren’t interested in decoding the books or criticizing them, as so many of us do (of course, this too is valuable and eye-opening). Instead, in the first episode, Vanessa asks, “What if we take this seriously? What gifts is it going to give us if we love something, and we love it with rigor, and we love it with commitment?”

I’ve implemented many reading practices over the years: I’ve proofread, skimmed, annotated, indulged in escapism, engaged in criticism, and evaluated submissions. And still, Harry Potter and the Sacred Text opens me to something new: a generous and hopeful relationship with books that I love. I’ve come to depend on this ritual—not just of reading, but of listening, too.—Lydia Zoells, Editorial Assistant, MCD×FSG
+ Moby Dick Big Read
+ Beef and Dairy Network
+ You’re Wrong About
+ The Adventure Zone