F.L.O.W., a Feminist Library On Wheels 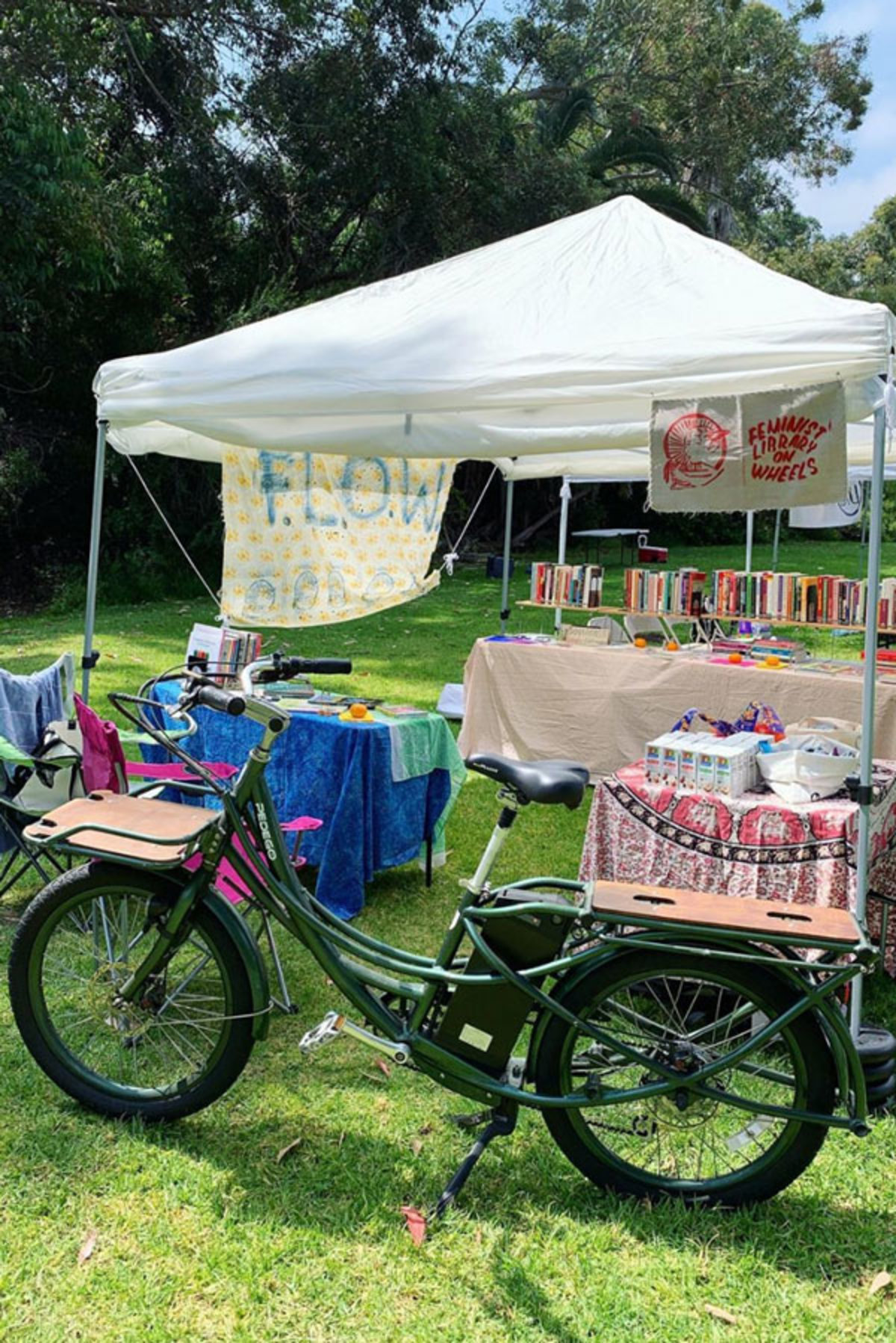 On election night in November 2016, I was at the Women’s Center for Creative Work, located in the Frogtown neighborhood in Los Angeles. A group of us had left the main room where televised election results were being projected onto a big screen. It was moonless and dark. Tiny bats flitted beneath the lamps along the bike path. What had started out as a party with a pot luck and music and very strong drinks in plastic cups had quickly turned into something else. We sat on the rough cement banks and passed around a joint. Occasionally we heard a swell of disappointed cries as Trump won another state.

I did not want to go back inside. I wanted to go home. The party was over. Dozens of other women were already in tears around me. But a friend convinced me to stay; she had to finish her volunteer shift at the main branch of F.L.O.W., the Feminist Library on Wheels, located at the WCCW. I agreed and soon, aided by a bottle of rioja, we were giggling over the Nancy Drew series, reading from Toni Morrison and Ingeborg Bachman. We soothed ourselves with texts on feminism and art history and took solace in the wide selection of zines. It’s impossible to be distraught when reading a zine on feminist birdwatching or doodling in a nail-art coloring book. Other women started to filter into the library. My friend prepared library cards for four new patrons. They checked out books by Rachel Cusk, Deborah Levy, and a horde of other women writers—an arsenal to comfort and revive them for the long fight ahead.

F.L.O.W. was founded in 2014 by Dawn Finley and Jenn Witte. In addition to their main branch, the library travels via bicycle to farmers’ markets, CicLAvia, zine fests, and other sites around Los Angeles, making feminist literature, media, and ephemera available to audiences that may not visit the library. F.L.O.W. library cards are free and card holders can check out as many books as they want on the honor system. Their collection is entirely donation based, although they do have a wish list, if you’re feeling generous.

I recently had a chance to interview Dawn Finley about F.L.O.W. and their mission. —Liska Jacobs, author of *The Worst Kind of Want, MCD×FSG*

Liska Jacobs: As a native Angeleno, I love the idea of having a mobile library that can serve multiple geographic locations. But how do you tackle a city like Los Angeles, which has so many diverse neighborhoods?
Dawn Finley: We had the same question at the beginning, but the answer was quickly solved for us as invitations to various events all over Southern California poured in. Most of the time we go where we’re invited, although at times we’ve reached out to event organizers directly, or decided on our own to table or attend an event that felt right (like CicLAvia or the Women’s March). Our capacity to travel from the Women’s Center for Creative Work in Elysian Park has also varied over time, depending on the availability of volunteers, funding, and transportation.

LJ: Did the focus on feminist texts play into where F.L.O.W goes?
DF: At some level I suppose it does, although we’ve attended events that aren’t explicitly intended for an exclusively feminist audience, like concerts, flea markets, or festivals. We also declined an invitation to attend one event after the organizers decided not to address concerns raised about the safety of nonbinary or gender-nonconforming attenders, which we felt was an important feminist issue.

LJ: The main branch has too many books to bring on a bike, how do you curate which books stay and which come with you?
DF: We have 5,750 items in our catalog right now, so we have a lot of material to choose from! There are a few things we consider in pulling books for an event, like making sure to have a wide range of different voices and genres represented and making sure there aren’t too many books from a single donor (this concern was greater earlier on, when we had two very large donations of books). At L.A. Zine Fest we always take our zine collection, but we might take just a selection of zines to an event like Dyke Day L.A. If we know there will be a huge range of people there, we tend to take a similarly broad range of books; if it’s a more intentional group, we might choose more selectively. Each volunteer has their own method—I try to always take a handful of books I’ve read so it’s easier to make recommendations.

LJ: Quoting from bell hooks’ Feminism Is for Everybody, which I know inspired F.L.O.W., “Imagine a mass-based feminist movement where folks go door-to-door passing out literature, taking the time (as do religious groups) to explain to people what feminism is all about.” How does this affect the role of F.L.O.W. librarians?
DF: I’m not sure I have room to adequately address this question here—it’s a big one. We try to be very ecumenical about how we approach feminism, especially with people who might be new to it or a bit intimidated. In the first couple of years I had several interactions with new card-holders who felt like they had to apologize for what they perceived as a lack of education or familiarity with Feminism™, and I worked hard to try to put them at ease. A F.L.O.W. library card doesn’t tell you what feminism is, it gives you a tool you can use to explore what it means to you and your experience. We try to make the library a safe and welcoming place to learn and grow.

LJ: Already bicycles have a feminist history. And bicyclists definitely have a fraught relationship with Los Angeles. Has biking the city changed how you see it?
DF: Every F.L.O.W. volunteer would have a different answer to this question, since we’re all different kinds of cyclists. Some have done racing, others know how to fix derailleurs and chains, others are commuters, others prefer to rent a ride at the beach and cruise down the path there. Personally, biking the city completely transformed my understanding of privilege, gentrification, rising inequality and stratification, but it also unleashed a lot of athletic and physical energy I had no idea was resting inside me. I’ve been out of the saddle for a while, but I’m looking forward to getting out on my electric cargo bike more often once the air quality improves and the temperatures cool a bit this autumn and winter.

LJ: I have to ’fess up to something. I checked out a Nancy Drew book months ago. I’ve been reading it very slowly with my young niece. I’m wondering if you have any favorite books in the collection that you would recommend to young minds?
DF: There’s nothing to ’fess up to—how wonderful! I don’t know whether people realize just how many books we have for young readers. We have board books, picture books, young adult fiction, self-help guides, history, and more. Some are bilingual, like Diana Cohn’s ¡Si, Se Puede! / Yes, We Can! Janitor Strike in L.A., or Nancy Luenn’s Gift for Abuelita / Un regalo para Abuelita: Celebrating the Day of the Dead / En celebracion del Dia de los Muertos. And beyond what might be more expected titles by writers like Judy Blume, Madeleine L’Engle, or Beverly Cleary, we also have fiction by writers like Cynthia Kadohata, Jacqueline Woodson, Mariko Tamaki, and Isabel Quintero. I just entered Kate Bornstein’s Hello Cruel World: 101 Alternatives to Suicide for Teens, Freaks, and Other Outlaws into the catalog last week, and I hope it reaches a young person who needs it.