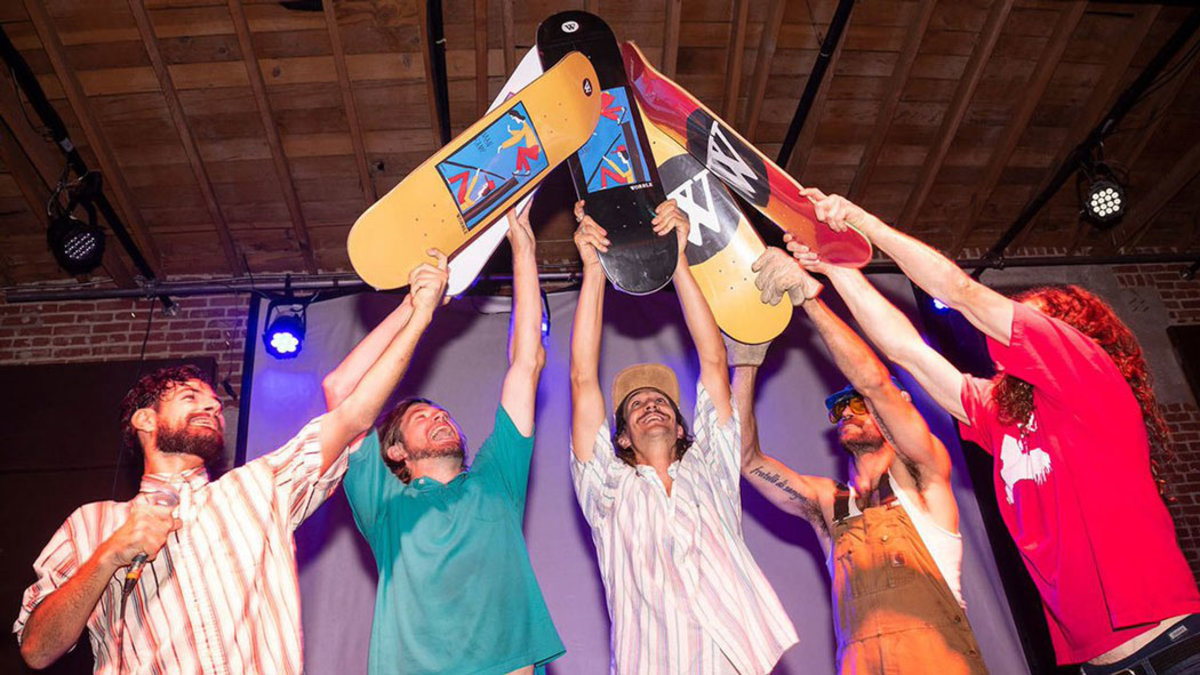 Tom Mull and I met at a Christian summer camp in high school. Later that year, he invited me and some friends to visit his family’s house in Vermont. We went sledding, and his brothers attempted, and landed, some seriously crazy jumps.

I knew that Tom and his brothers were sponsored by a sled-making company and that they were semi-celebrities in their town of Manchester, Vermont. But I didn’t realize the extent of their fame until I began reading about them in Thrasher Magazine.

Today Tom, Steve, Chuck, and Dave Mull form the Worble, a skateboarding crew, and Thrasher premieres their videos. I, along with over 57,000 others, follow their Instagram for clips and photos of their jumps, tricks, and glimpses of what Manramp, a crew member who submits his own body to creative tricks involving ramps, is up to.

Most of their Instagram clips, and all the full-length videos they’ve released so far, are made by Tom, the group’s filmmaker and creative director. Thanks to their significant social media community, Tom and the crew were able to buck the usual skateboarding sponsorship arrangement in 2018. Now they make their own boards.

I caught up with Tom about his skateboarding and filmmaking, and what it was like to build the Worble with his brothers over the years. Our conversation, which came together in Google Docs, is below. —Lauren Roberts, Associate Publicist, FSG

Lauren Roberts: Even people who don’t know much about skateboarding, like myself, know California is the sport’s birthplace, and a great place to skate year-round because it’s always sunny and warm. You grew up in Vermont with its winters, and sledding was a big winter activity for you. How did the seasons in New England impact you and your brothers as skateboarders?
Tom Mull: To put it bluntly, frost heaves crack the pavement and make skate spots harder to find and harder to skate, so I believe seasons breed a more resourceful and creative skateboarder. Even though we’re in Los Angeles now, and surrounded by smooth, pissed-stained concrete, we find ourselves drawn to the gravel and dirt.

LR: You all do skate resourcefully! A lot of videos come to mind, like the one of Dave, who swings out of a tree into a jump. Can you talk a bit more about creativity in skateboarding?
TM: Haha, that Tarzan swing was incredible. There are so many creative aspects to skateboarding, but my favorite is the process of finding skate spots. The creative vision it takes to reinterpret a landscape is incredible. I really love the way the crew sees so much beauty and potential in the most seemingly mundane places.

LR: The Worble’s website talks about “rewilding,” which seems to me like a philosophy of skateboarding: that the board can be a medium for exploring or experiencing natural surfaces, not only suburban sprawl. What does rewilding mean to you? And does rewilding change where the Worble crew chooses to skate?
TM: Yeah, the About page on our website is a beautiful little piece written by the oldest Mull brother, Chuck. He goes into far more detail than I can here, but to me, at this point in my life, rewilding means experiencing a landscape with the energy and curiosity we had as kids. And skateboarding is the best way to preserve that. Between exploring the neighborhood and filming zombie films with our friends, not much has changed in the past eighteen years. And that’s the plan. :)

LR: In the time I spent with your family, your closeness left a big impression on me. You and your brothers obviously loved working together on projects and skating together. When did you decide to form a crew?
TM: The decision to form a crew was my parents’ decision to have a lot of kids, haha. My brothers and I have been a crew since birth, and we’ve been meeting and recruiting amazing people along the way. Our younger sister Jennie has picked up skating and now loves it just as much as we do. But in 2010 we decided to call it Worble and make a website to host our videos. It felt like an effort to organize, preserve, and focus on our favorite parts of life: skateboarding, friendship, and Vermont.

LR: How did you get into making videos for the group?
TM: I was born with a joint disorder called Multiple Epiphyseal Dysplasia, which can make skateboarding a little difficult and painful. Despite how much I loved skating as a kid, I did not progress as fast as Dave and Steve, and somebody needed to film their driveway stunts. I just wanted to be involved and filming was a great way to contribute. Having incredibly talented and hilarious brothers made this job very enjoyable. So that’s how I got introduced to video cameras, and that’s where my love for them started. I was eleven or twelve years old.

LR: And you’re an accomplished skater, too. Can you talk more about your own skating?
TM: Hmm. Well, my body does not like impact, so the tricks I end up learning are pretty atypical. I enjoy experimenting with various movements and appendages to find out what my body does like. My legs have the most limitations, so often I end up using my hands to flip the board.

LR: The Worble now has 57.1 thousand followers on Instagram. When I watch them I have the sense that I’m following your crew on an adventure, and that adventure just happens to be skateboarding. Do you have an audience in mind when you make Worble videos? Do you think about reaching a wider audience than the skating population?
TM: I don’t think about a specific audience, I just want to make videos that are as entertaining as possible—without compromising authenticity and good taste, of course. So when someone tells us that they enjoy our videos even though they don’t skate, it means so much to me.

LR: We have to talk about Manramp.
TM: Manramp is a guy that used to work on a pig farm in upstate New York. I think he did construction on the side because one day he was building a pavilion by our local skatepark and asked to try one of our skateboards. He did a kickflip on his second try. We’ve been best friends since.

I never laugh harder than when I’m filming Manramp videos.

LR: What are some of the challenges of shooting a skate video and what do you enjoy most about the process?
TM: One of my biggest challenges is confrontation. More often than not we’re skating private property and have to talk with angry residents or security guards. This is stressful at first, but can sometimes lead to meaningful conversations with strangers. One time we befriended an angry resident over a mutual appreciation for Henry David Thoreau. Fury and judgement turned into conversation about private property and distribution of wealth. As we parted ways, three cop cars pulled up and sat us on the sidewalk. The once angry resident ran down the street and told the cops we were “chill.” Got off the hook!

LR: Where are you now, and what’s the Worble doing next?
TM: Physically, we’re in Los Angeles. Mentally, we’re happy and grateful for all of the opportunities coming our way. The goal this year is to put out three skate videos, release a six-episode Manramp series, go on a summer tour with Cobra Man, and release four seasons of product. Wish us luck!