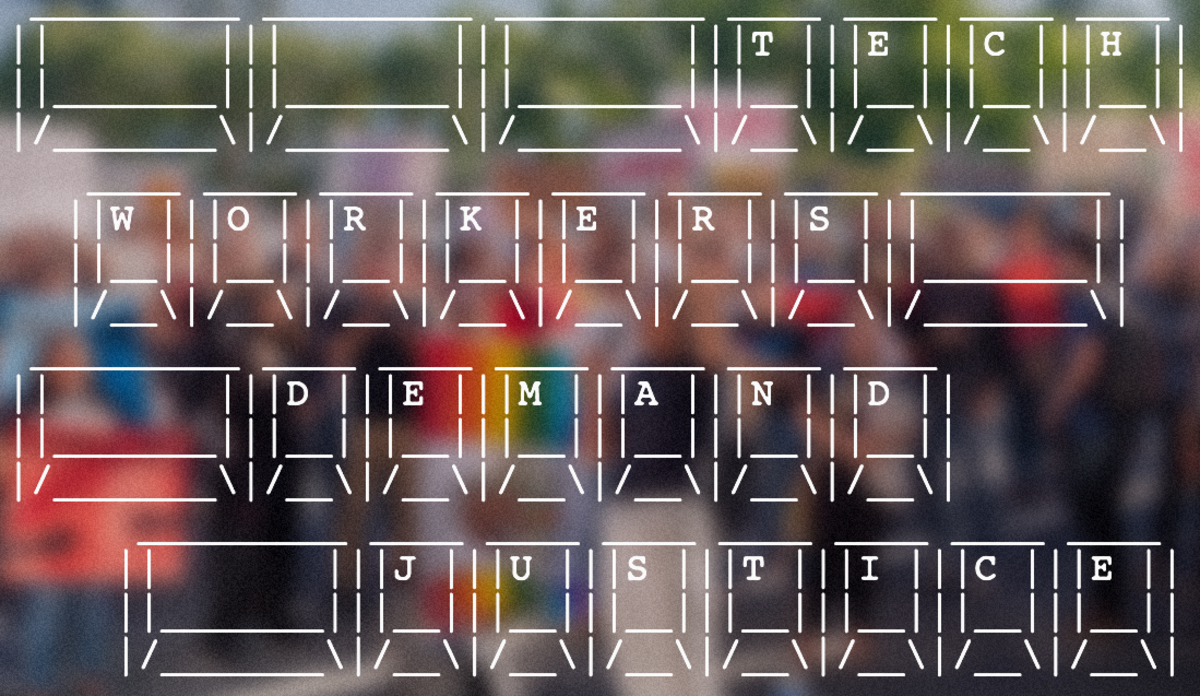 Logic Books is a new publishing venture from FSG Originals and Logic Magazine. The first season, to be published in October, will feature four short books, exploring different aspects of how technologies are rewiring our bodies, brains, and civilization. In the coming weeks, Electric Eel will be sharing original essays from Logic Books and MCD × FSG Originals authors.

Today’s newsletter is from Moira Weigel, a co-founder of Logic. In this piece, Weigel shares her notes from January 18, 2017, a day when a number of tech workers organized a protest outside of the Palo Alto headquarters of Palantir—the data analytics company, co-founded by Trump advisor Peter Thiel, which has become notorious for helping ICE conduct workplace raids and deportations. At the time, the spectacle of tech employees protesting a tech company was still a novelty.

Today, however, employees at Google, Amazon, Microsoft, and other companies are organizing campaigns to demand greater control over their work and their workplaces. Employees at Kickstarter just voted to form the country’s first union of full-time white-collar tech workers. The tech worker movement is growing. In retrospect, that day in January would be one of its first stirrings.

A chilling rain had been falling all morning, but by 10 AM, nearly seventy people had gathered outside the Palantir building in Palo Alto. Volunteers put on neon yellow crowd control vests, and legal observers stood by in neon yellow caps. A contingent of journalists huddled under the awning. Someone slipped a stack of flyers for the next meeting of the Palo Alto chapter of the Democratic Socialists of America, a group whose mostly young membership had surged since the 2016 election, on the table. But nobody touched the coffee. “Did they think they were being nice, or did they know they were being assholes?” Stefano, an organizer from the local chapter of Unite Here, a labor union, joked. He meant for treating the action like a study break.

During the previous year, Palantir founder Peter Thiel had consolidated his reputation as a villain in mostly liberal Silicon Valley. He had been fashioning himself as a “contrarian” for over a decade. In 2016, he funded the lawsuit by Hulk Hogan that bankrupted Gawker Media, in retaliation for a story they had published about him, raising widespread concern that billionaires might deliberately use their wealth to silence the press. And he became a prominent supporter of Trump, speaking at the Republican National Convention in July and donating $1.25 million in October, during the last weeks of the campaign. Following his victory, Trump made Thiel a transition advisor, and Thiel brokered the Tech Summit on December 14, when heads of companies including Apple CEO Tim Cook, Alphabet CEO Larry Page, Amazon CEO Jeff Bezos, and Facebook COO Sheryl Sandberg, trekked to Trump Tower.

The photos that came out of that meeting marked a turning point for many people who work in tech.

In December 2016, Spencer Woodman, a freelance reporter, published stories in The Verge and The Intercept documenting connections between Palantir and the federal government. Woodman showed that the company drew over $131 million in the past year alone from contracts with Immigrations and Customs Enforcement (ICE) and stood to profit directly by collaborating with the mass deportations that Trump had threatened to carry out during his campaign. Tech Workers Coalition wanted to highlight two Palantir products in particular: AFI, which pulls data from federal, state, and local law-enforcement databases to create profiles of individuals and could serve as a “Muslim registry” precursor, and FALCON, a program that ICE uses to store, search, and analyze data on family relationships, employment information, immigration history, and other subjects.

At 10 AM, two members unfurled a large banner, facing Alma Street. On black vinyl, white tape spelled out TECH WORKERS DEMAND JUSTICE. Cars with both Hillary Clinton and Bernie Sanders stickers on their bumpers honked enthusiastically as they sped by. Valerie Aurora was in the crowd. A diversity consultant with Ka-Ping Yee, Aurora had created a public statement called the Never Again Pledge, which asked technologists to vow to work against government efforts to build databases identifying people by race, religion, or national origin; when it went up in December, thirteen hundred people signed within the first two days. At the protest, she opened her messenger bag to offer strangers drugstore ponchos and clear packing tape they could use to waterproof their signs: DISRUPT DEPORTATION. PEOPLE OVER PROFITS. #DOBETTERTECH.

Rachel Melendes, a professional boycotter with Unite Here who also volunteers with TWC, got things started. Standing in the open rain in a plaid lumberjack shirt and stiff-brimmed Unite Here hat, Melendes led chants in English and Spanish. “People!” she called, and the crowd responded, “Not profits!” “When immigrants are under attack, what do we do? Stand up fight back! El pueblo unido jamás sera vencido.” By the end of the protest she was soaked through and pink with cold, wet flannel clinging to her skin. Beneath the poncho someone finally got her to put on, she told me, “It’s a badge of honor.”

Residents of the Bay Area have become accustomed to activists confronting the tech industry. During the last weeks of January 2017, they, like people all over America, came out to protest the inauguration, to participate in the Women’s March, to flood the airports to protest Trump’s immigration ban, and to appeal to representatives to block Trump’s nominations. What was unusual about the Palantir protest was that white-collar employees from the companies that are usually being protested were the ones who planned it. Software engineers from Facebook, Google, and Stripe had taken a weekday off to stand with representatives of the people who drove their shuttles, cleaned their floors, served them food and coffee in their cafeterias. And they were not using the liberal language of “nasty women” or “resistance.” They were speaking the leftist language of labor and solidarity.

A handful of older Palo Alto residents, the kinds of sixties veterans who still call these kinds of actions “going to the demo,” joined Tech Workers Coalition, as did representatives of Stanford student groups. A few undergraduates who were first-time protestors, and had seen the event on Facebook, stood at the edges. One Facebook engineer who had studied at Stanford spoke to them, “It’s time that we think about the consequences of our actions: where we work, and what we work on,” he began. “Students, I ask you to think about your impact on the world and what your labor will contribute to that.”

Maria Noel Fernandez, campaign director for Silicon Valley Rising, an organization that represents low wage contract workers, called for solidarity among all people on tech campuses and in the communities that surround them. “This is about techies, it’s about janitors, it’s about students who come to me, afraid to go to school.” A prison rights activist connected the tracking and deportation of Muslims to the harassment and incarceration of the East Palo Alto community he had lived in all his life. “I grew up in the shadow of Stanford . . . When I hear about a Muslim database, I don’t ask anymore what it has to do with me.”

Mitch Stolz, a lawyer from the Electronic Frontier Foundation, exhorted engineers to use their influence to make specific demands at their companies. “Your skills create all the value, all the prestige, all the cultural moment that Silicon Valley has right now,” Stolz said. “You should have end-to-end encryption. You should insist that your company scrub your logs. Don’t keep what you don’t need; others will get it. When the government comes to you requesting data, tell the world; insist that your company publish transparency reports on the data requests that they receive. For companies like Palantir: know your customers.”

It was hard to read the mood of the few people who came in and out of Palantir as the crowd circled the entrance. One woman shot us a panicked look before opening and ducking beneath a large umbrella. But a broad-shouldered man in a pinstripe suit pushed his way through, apparently unbothered. Stefano, the organizer from Unite Here, rolled his eyes and smiled. Jamming his hands into his pockets and raising his eyebrows, he seemed to enjoy playing the gruff straight shooter to the nerds. “Did he not get the memo from Brian de Palma that pinstripes are for assholes?”