My family still owns a restaurant and we still call it “The Store,” but it is not “The Store” in my heart.

The one in my heart has a Dutch door and a tiled stoop, surrounded by the sound of roll-down gates with locks and pegs being thrown in a bucket. I am small and dirty with hair my mom calls “the rat’s nest.”

My twin sister, Minda, has an identical “nest.” We step barefoot on tables and take naps in vinyl booths. Charlie, Danny, and Zack, my three brothers, spin on stools and crawl on the floor. Two ceiling fans whirl above covered in dust clumps held together by grease.

And Willoughby stands by the door. He looks cool, even with roast beef hanging from his mouth.

The Store is on the corner of Morton and Bedford Streets in Greenwich Village. And it is still a village.

Everyone knows who we are. Teachers let us say “shit” in class and show up an hour late. “It’s not Zack’s fault,” the real teacher advises the substitute teacher. “He is a Shopsin.”

We drag cups across the plastic levers of our family soda fountain and make murder cocktails that contain every flavor. 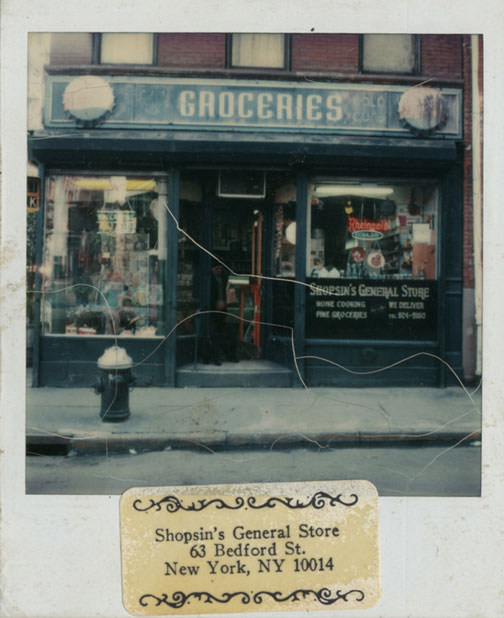 We are standing on top of the largest cave in Pennsylvania, but we’ve actually come for what is advertised in the putt-putt pamphlet.

I give the cashier a ten, and she gives me two balls and two putters. We go through a wooden saloon door with a snap spring.

It’s dark and the walls and ceilings feel like the fake rocks you hide keys in. It is way better than I imagined. There is a little bit of a grandpa’s basement smell. But if it weren’t for the Astroturf and ADA-compliant pathways, Kavernputt could look like a real cave.

The golf course is difficult, mostly because it is very dark. There are no windmills, only rock formations.

My night vision kicks in and I get a hole in one. Jason gets a hole in six. This can’t last.

All of the holes have a geological theme and employ different tricks. They are charming and inspired. The hole about echoes has voice-activated lights. I repeat “echo” over and over, making them flicker.

In ancient Greece, Zeus was saved by a cave. His mom, Rhea, hid him in one. She did this so Zeus’s father, Cronus, wouldn’t eat him. Rhea then wrapped a rock in swaddling clothes and gave it to Cronus.

Cronus swallowed the fake baby ASAP, because it was foretold that one of his sons would overpower him.

My father would never have eaten the rock baby.

One of his core beliefs is that as a parent you shouldn’t try to be too wonderful. Being perfect makes it so your children can’t compare and gives them a complex.

If you set the bar low your kids are sure to at least be more successful than you.

Zeus grew up to overthrow Cronus. He also grew up to swallow his unborn baby and wife.

We love the course and consider it a work of art, but are both relieved as hole 18 swallows our balls for good.

Next to the kitchen is the gift shop. I ask the cashier where we can find the “These Are My Jewels” statue. She is polite but has no idea.

The statue is from a chapter in My Life and Hard Times. Columbus gets hit by an imaginary flood. A woman, trying to escape, climbs the town’s Civil War monument.

“These Are My Jewels” is inscribed on the statue. Thurber drew a cartoon of the woman on top of the bronze soldiers who watch “with cold unconcern.” She wasn’t naked in the story but is in the cartoon.

“That could be. It’s worth a try,” the cashier says.

The center of downtown: Sherman, Stanton, Grant, and Sheridan are there as described. So is the phrase “These Are My Jewels.” But instead of an empty pedestal above them, there is a sculpture of a lady. She isn’t naked, but you can see nipples through her dress. I look up and think about how back at the house, Thurber is probably saying nice things about E. B. White right now.

Leo couldn’t explain how to get to it, just that it was worth the trip.

So Jason had Leo get on the back of his motorcycle, and the way you find a light switch in the dark, they found the BBQ place.

The light revealed a run-down gas station with a smoker whose doors had welded-on the initials “LC,” junkyard style. When the doors opened, half a foot of black crust was baked to them, and inside were shelves of sweet meat.

Jason went back to the place the next two days so he would never forget where it was.