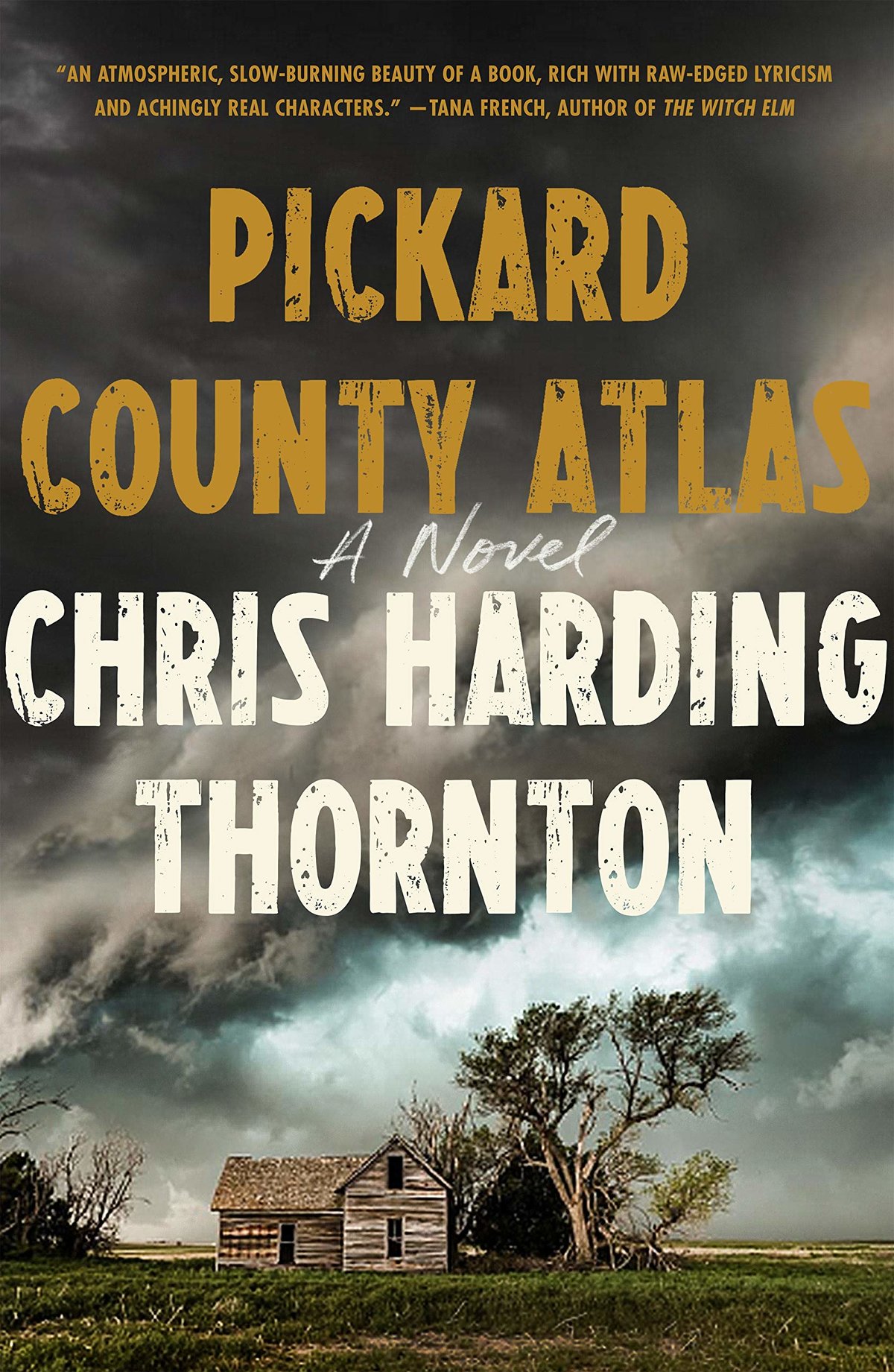 Happy New Year. Here at MCD, we sure are happy to arrive in January 2021, but we’re still, of course, suffering a bit – the events of late feel even more absurdly, head-scratchingly, sadly, comical/tragical than usual. For the darkest time of year, we bring you a list of books that fit this mood, from our very own Chris Harding Thornton. Her (often funny) Nebraskan noir, Pickard County Atlas, is out from MCD this month, and was highlighted in this week’s New Yorker as an “atmospheric début thriller.”

One Easter, a cluster of aunts, uncles, cousins, and I crammed into the narrow kitchen of my grandparents’ house. Some sat at the table, overflow leaning against the walls and counter, all of us chattering away until Grandpa told us how his father killed chickens.

He claimed it was based on a kosher method his dad learned while “working out”—making extra money on neighbors’ farms as a hired hand. Youngest of nearly a dozen kids, Great-Grandpa was a tenant farmer—he rented and sharecropped and eventually worked as the school janitor. He was gentle, kind, quiet, and funny. He called us kids “whistle-britches” and “little honyocks” well into our teens, and he was handsome in an earnest way. Not like a leading-man but a character-actor—chin a little sharp, nose bent from some break or another.

By that Easter, he’d been gone over two decades, and his son was in his eighties. Half the room talked ailments and job hassles, car alternators that were shot, kitchens needing work, while Grandpa told how Great-Grandpa killed chickens: he slit their throats and slipped their necks between the slats of a fence—so they’d bleed out into sleep.

“You know,” Grandpa said, his voice a shrug. “Just like you do people.”

We all leaned and sat where we were in disoriented silence. A beat passed. Two beats. Then it registered—he meant the way corpses are drained for embalming.

When the first laugh broke, the whole room shook with it. He did, too. An aunt gave a loud Dear God, and another hissed tsks between low and breathy giggles.

You may not be laughing. I’ll blame the delivery, but I also know this humor isn’t for everyone. To some, a hint of dark context makes punchlines a moral failing—or worse—imperceptible. For others, the same laughter is a thread in the psyche’s fabric that, if yanked, would leave a pile of lint.

Because I belong to the latter category, that thread weaves through my book Pickard County Atlas. And because I wasn’t sure it would fly, I flaunted sage advice about never reading one’s reviews. I skimmed the first few: slow-burning noir. Steeped in trauma. Dark. Grim. Fair enough. All accurate. Then I saw the word on Goodreads, twice, in brief asides: funny. And with that, I quit reading reviews and felt the elation that, for me, comes only from laughter: a momentary reprieve from a world of horrors and unbearable existential dread.

So, while I’m still riding that high, I’d like to point to a few favorite books whose starkness, mournfulness, tragedy, outrage, and somber meditations reverberate, for me, because they have moments that are deeply and sublimely funny.

The Home Place, by Wright Morris

First published in 1948, The Home Place is a quiet meditation in the form of a “photo-text”—story interspersed with images. Morris’s photos seem almost incidental, never literal, but they gradually take on more and more visceral weight. The plot: small-town Nebraska expatriate Clyde Muncy returns from New York with wife and kids to visit an aunt and uncle. He looks at things and thinks about them. Fin. Morris wrote more than thirty books, two of which won National Book Awards. Those two aren’t great, but this one is. It’s a beautiful, haunted thing about objects of haunted, unlikely beauty, and it quietly, stoically rips out your heart.

It’s also funny. The narrator’s wit pivots between barbed and self-deprecating, while “the old man,” Muncy’s uncle, interjects “dry, scaly humor and as fine a dead pan as Buster Keaton.”

You know who liked Wright Morris’s work? Ralph Ellison. He also diagnosed, with surgical precision, why most people wouldn’t. In a 1970 interview for The Atlantic, Ellison said, “I think the problems of the writings of a man like Wright Morris come precisely because he has written so extensively about a little-known part of the United States in a very understated way. He’s a very good writer, but people don’t really know enough about the reality out of which he writes to make them fully appreciate what he’s doing.”

Ellison cleared a much higher hurdle than regional distance with Invisible Man. In a sprawling bildungsroman-gone-awry, he created an extensive exploration into a reality most people can’t know—an individual consciousness within a collective humanity, experiencing the world in isolated ways that are also shared. To some extent, that’s what most writers aim for, but Ellison not only nailed it; he crafted the quintessential American novel, laying bare life’s layers of tragi-comic absurdity in gut-wrenching, beautiful, horrifying, and true fashion. There are also at least three moments in my beaten, dogeared copy marked LOL, even if the story had me on the edge of bawling a paragraph later.

The Butcher Boy by Patrick McCabe

In the early 2000s, I heard McCabe read from what was then his latest work, Emerald Gems of Ireland. On the top floor of a bookstore on Berkley’s Telegraph Avenue, I sat in the front row of maybe six. As he read, animatedly, I had two or three bouts of laughter I couldn’t silently swallow. He glanced, surprised, and smiled while the eyes of Berkley bored holes through my head. Afterward, he signed my book and said I’d nearly made him crack up himself. That may be my proudest moment.

Years earlier, I’d read McCabe’s 1992 novel The Butcher Boy in a single sitting. The story of Francie Brady is a downward spiral: an abusive father, a suicidal mother, incarceration, molestation, and some eventual dismemberment. I laughed and cried alone in my apartment, and for a week afterward, Francie Brady’s voice animated my every movement. At the end of that week, I decided to write books.

When I told my spouse Slaughterhouse-Five was one of the funniest books ever written, he stared back like I’d just disemboweled one of our cats. But look at this: “I have told my sons they are not under any circumstances to take part in massacres.” Or this, in descriptions of Billy Pilgrim’s private moments of weeping: “It was an extremely quiet thing Billy did, and not very moist,” and, “Billy turned on the Magic Fingers [a vibrating mattress pad], and he jiggled as he wept.” I won’t attempt to summarize the plot. Is it one of the most potent anti-war novels ever written? Yes. Does it horrifyingly depict the fire-bombing of Dresden and its aftermath? Yes. Is it also funny? Yes.

The Awakening by Kate Chopin

If a sizable readership of Plath’s The Bell Jar can say that’s funny (it has its moments), Kate Chopin’s 1899 novel The Awakening is a riot. During a wryly rendered, insufferable vacation with a bunch of spoiled bores, the also-spoiled-but-oppressed protagonist Edna Pontellier, wife of a man-boy and mother of two man-boys in training, develops a steamy crush on another man-boy, Robert Lebrun. When Edna and family return home to New Orleans, she remains married and moves into her own place, has a meaningless affair, Robert shows up then disappears forever because he is a dramatic prude, and then nearly every reader misconstrues her motives as she swims into the sea. (Spoiler alert: it is not about Robert.)

I had a professor during undergrad, a hilarious New Critic—they existed—who, after reading aloud some bit of early American poetry, glanced up from the podium to boom, And what does the ‘sea’ stand for? We were silent. He wanted one answer, not an interpretation. A tentative hand rose. The answer came as a timid question: Death? The professor boomed, YES.

Bartleby, The Scrivener: A Story of Wall Street by Herman Melville

The BBC counted this as a novel in a 2019 list, and it’s always read like one to me. The story: an aging, affluent lawyer hires an extra scrivener, Bartleby, to act as a human Xerox machine. Initially, Bartleby outperforms the other scriveners, but the lawyer isn’t satisfied. Why? Bartleby is industrious but not “cheerfully industrious.” Then, on the third day of work, when asked to do some proofreading, Bartleby states his famous refrain: “I would prefer not to.” From there, the narrator wrestles with the mystery of Bartleby’s refusals. The hilarity culminates in the lawyer relocating his own business to be rid of Bartleby, though that’s not quite the end of the story.

Why is Bartleby funny? The narrator’s lack of self-awareness borders on obscene. An acquaintance of John Jacob Astor (a name he loves because it “rings like unto bullion”), the lawyer has nestled like a tick into money and bureaucracy, making his living “among rich men’s bonds and mortgages and title-deeds.” Meanwhile, he justifies paying low wages to one scrivener because “He was a man whom prosperity harmed.” When Bartleby simply opts out of conventional notions of property, commerce, and authority, watching the mental gymnastics of a man who considers employees “acquisitions” makes for transcendent comedy and commentary alike.

Winter in the Blood by James Welch

James Welch’s slim 1974 novel revels in the absurdity and surreal of the real. Its main character has recently returned to his rural home on the Fort Belknap Reservation to find the girlfriend he’d left with his family has now left him, absconding with his gun and electric razor—that’s funny already—the electric razor. Deeply disconnected from himself and wanting to be anywhere he isn’t, he travels on the pretense of searching for his things and, in the process, shows the world through the bizarre precision that only deep disconnection provides: a woman in a bar blows smoke rings at a mirror, no cigarette in sight. Conversations in bars and motel rooms flip from ominous to hilarious and back again. A man in a safari costume and an ever-changing backstory may or may not be running from the feds. There is a giant purple teddy bear for a while. Of course, the main character’s disconnection from himself is rooted in grief and guilt, and when he finally feels it, the reader does, too (I just re-checked, and knowing how it all plays out doesn’t lessen any sob inducement). He then, in a soul-stirring moment prompted in part by a horse’s fart, discovers the answer to a mystery he hadn’t even known he was curious about, and the story ends with a funeral that perfectly marries loss, absurdity, humor, and change.