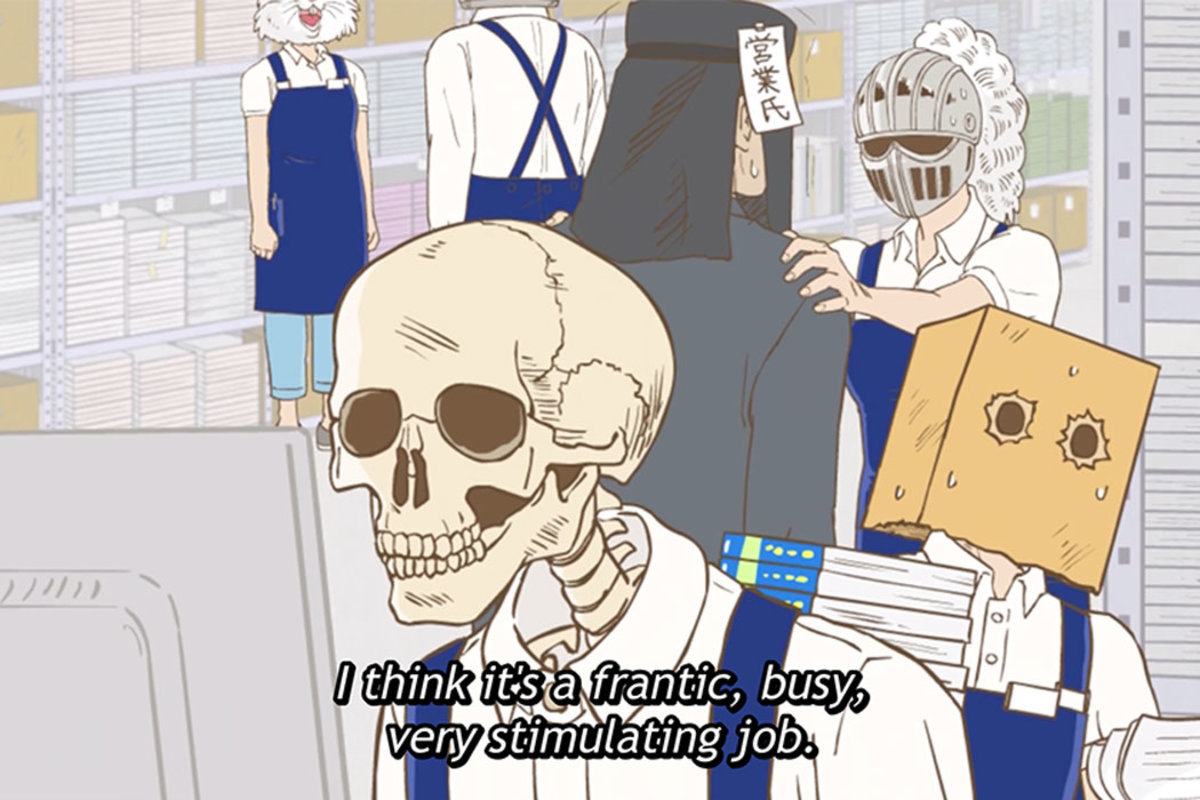 Skull-face Bookseller Honda-san is an anime series adapted from a manga about a manga bookstore. It’s meta. None of the booksellers are depicted with human faces — instead, they wear bags and helmets. Honda-san’s head is only a skull. This is never explained.

What initially caught my eye about the show was its use of text and graphics, which is more liberal than most anime, and that’s saying a lot for a medium that often operates like a comic book come to life. The scenes are layered with graphics: ornately-bordered windows explain each bookseller’s specific responsibilities while diagrammatic depictions of supply chains overtake the anime’s “real” world. At moments, four or five layers of text are stacked on the screen – last of which, for an American viewer, is the subtitles, which fit comfortably into scenes that are already massively annotated.

This next clip is a good demonstration of both the show’s fascination with the nerdy details and its graphic approach. Also, you’ll learn something about the difference between manga and American comics:

There’s a kind of bravery in this show’s insistence that Honda-san’s work is interesting and dramatic enough on its own. If Skull-face Bookseller Honda-san was an American production, the pitch would have been: “Meet Honda-san, the droll young bookseller . . . with multiple personalities! Each of which reads a different genre of book!! He is broken character, truly!!!” So it’s a good thing we have the real version of the show, for which the pitch could have been: “Meet Honda-san, who works at a manga store. You will learn nothing else about him or his life. He’s going to explain how a manga store operates!”

What makes Skull-face Bookseller Honda-san more than a pleasant diversion is its easy cosmopolitanism. Throughout the series, Honda-san and his colleagues matter-of-factly serve customers from around the world who have traveled to acquire manga at the well-spring — charmingly, stumblingly, passionately. There’s a hall-of-mirrors comedy to the Japanese voice actors’ delivery of these customers’ lines in careful English, which appear translated in subtitles for Japanese viewers, and then again into English for American viewers. It’s a lot!

For all of my reading life, the arrows of culture and commerce have pointed towards openness, exchange, and translation. I thought that was both natural and inevitable, but the last few years have called that assumption sharply into question. So, I think it’s not merely fun but essential to depict and celebrate these supply lines. In his bookstore, Honda-san oversees the foreign comics section. He complains: those books are printed in color on higher-quality paper than their manga counterparts, and as a result, they’re much heavier to lift. His back makes a dry snapping sound. His face distends, Edvard Munch-like. Of course his bookstore in Tokyo stocks foreign comics. Of course I can watch this odd and wonderful show on my laptop in Oakland. Cue: shower of sweat, dagger-sharp lines. Skull-face Bookseller Honda-san makes manic drama from the mundane business of reading, and it represents the world I care about most. —Robin Sloan, author of Sourdough and Mr. Penumbra’s 24-Hour Bookstore