Explore the World of The Boatman's Daughter
Rome and Puglia, Italy

The Dead Astronauts “mix tape” consists of 900 songs, played on shuffle unless I needed to summon a certain emotion for a particular scene. The 23 songs here are either favorites or representative of albums I love. But loving an album isn’t enough—I write very much by feel and music is essential to that. I have to be in the right headspace to stay within the style and voice of the novel. In the case of Dead Astronauts, there are ten sections and ten different perspectives and styles.

Yet pervading everything in Dead Astronauts is a dual sense of anger and defiance mixed with acceptance and loss. These are big, almost operatic emotions that manifest in the novel in both bold, over-the-top ways and in a minor key, with intricate little eddies and shifts in perspective.

Thus the music I was listening to has at times an operatic feel and at times is stripped down to a post-punk aesthetic. A driving beat or a lovely piano bridge were equally important, but also certain kinds of approaches to guitar. (For this reason, the ethereal precision of The Church figures prominently in those 900 songs.)

Some bands I could’ve included here, I haven’t because in the context of Dead Astronauts they’re too self-referential. So, for example, I listen to Murder by Death a lot, one major part of that the soundtrack they did for my novel Finch—which conjures up such an atmosphere it has been of use in writing every novel since. Others, like Hot Snakes, are already given a nod in the book itself. A few, unnamed, I love but have listened to so much I need a break from them. All the songs on this playlist I still respond to even after having listened to them so much.

Finally, I should note that as a teenager, I discovered Midnight Oil’s album Red Sails in the Sunset and thought the sound was science fiction. Maybe they got too slick later on, but *Red Sails *is a fusion of their punk/post-punk aesthetic with something beautiful, something that’s activism and art. I have thought of this album often during writing all of my novels. Trying to capture that feel.

In my descriptions below I’m often trying to convey how I felt listening to them, as I transferred that emotion to the novel. As a result, these are in some cases “misreadings” of the actual intent of the songs.

A powerful Metrical benediction for the playlist, about perseverance, and containing the underlying beat that carries through in many of these songs.

One of Spoon’s most haunted tracks, turning the spiraling intensity of their usual stellar guitar work toward epic melancholy. A portal into a different space and place.

3 Broncho – All Choked Up

The march of a mission coalesces, with an insistent hook and obscure lyrics that allow for whatever reading you desire. We haven’t arrived yet, but we’re going somewhere. We’re writing at a constant clip, to that beat that beat that beat.

The counterpoint to Broncho, the march that of orbit in space, a revolving slow majesty with a human heartbeat at the center of it. When you stop to consider the wonder of it all.

5 The Auteurs – Fear of Flying

The jangle of the Byrds slowed down and repurposed as a beautiful dirge and warning, with the beat I love still there in the backdrop. “You may be wary of fallen stars/they’re always poking around in the dark.”

Music in the moonlight from a band that earns “ethereal epic.” Something ethereal that evades one’s grasp and yet, for a quivering moment, is revealed in the moonlight, before it escapes. The fey infiltrates through the forest canopy and out into the open at night, conducts its experiments, retreats before daybreak, leaving a phosphorescent residue gleaming across dewy grass. Is this feeling why you fight on?

7 The Coathangers – Excuse Me?

A return to the mysterious texture of the Spoon song. And once you get there, the place is strange and you feel the lingering presence of something now distant that knows you too well. (Yet it’s also a rude fuck you song, too.)

8 Clearlake– I Hate It that I Got What I Wanted

A sharp shot across the bows, Clearlake specializes in something cold but beautifully non-clinical. And no matter how you try to ignore it, the past leaps forward into the present to destroy it.

Minor key brilliance with a rough guitar sound to destroy the too-perfect and sophisticated whirls and eddies tunneling through. Wormholes spinning out into the world.

10 Midnight Oil – Best of Both Worlds

Here’s where it all begins to fall apart and come back together. There is a sudden sandstorm and a shadow against a door and three dead astronauts reach their nadir.

Attenuated and repurposed for the long haul between objectives; lost somewhere between points on a map. In the epicenter of nothing, where the betrayal occurred, nothing is clear and the desert sand destroys your vision and traps you in its gritty embrace.

Wandering, beset by monsters invisible, in the aftermath. One of my favorite bands, the Church are quantum at their core, with the best surreal yet precise guitar sound and underrated lyrics that convey worlds.

The mystery has a beat, a pulse. Wandering in that place, picking up the pieces, remembering the beat, the ghosts have names and speak to you. A stranger in a cloak reveals himself to you: “I’m Steve Kilbey and this is The Church in disguise.”

A beat quickens as a new destination. Through the murk, there is a cold light in the distance to guide your way. A voice like beaten steel sharpened into a sword. The metallic flash of Cranes always makes me think of the angular beauty of the bird and the something alien in that long glance across the beak.

15 The Dears – Summer of Protest

You remember why you fight. You remember how to fight. And you march forward again. The Dears bring back the beat from Broncho, repurposed for the political. Among the most empathic of bands, their gorgeous, sometimes angry music full of passion.

Failure is inevitable, but how we carry it matters. I saw this song performed live and it was as though the guitar was inside my brain, a direct line, cocooned and glorious and all-absorbing. (Jason Molina was a genius. Enough said. RIP.)

The universe fragments and replicates and divides again and you’re watching it all happen through these lush, deep, cinematic songs from Viva Voce. (It’s difficult to be epic without being vainglorious, to be observant not observer.)

The start of a dying fall, with lovely piano. “When you were young, we took you in…” The past begins to intrude again on the present and the future. A band more people should be listening to, with so many memorable, sophisticated songs.

The winding down of a beautiful chaos, with lurching choruses out of nowhere and a sense of desperation as you reach the climax…except it’s all already happened. Somewhere. (Imagine the neighbor asking you what you’re listening to these days and saying “Tropical Fuck Storm.” As I have.)

A haunted, propulsive, off-kilter protest with a beautiful echoing chorus that somehow also conjures up “Chameleon Paint.” These two songs exist in different corners of the same multiverse.

One of the most gorgeous songs about loss (and love) I’ve ever listened to. Full stop.

23 Fear of Music – Put the Lights Out

“And we’ll burn this house down from the basement up…” That piano again, and conjuring up a sense of isolation and loss. When you’re alive after the end of history. “Back to the ocean where I began.” (Obscure band, whose great two albums are now available online.) 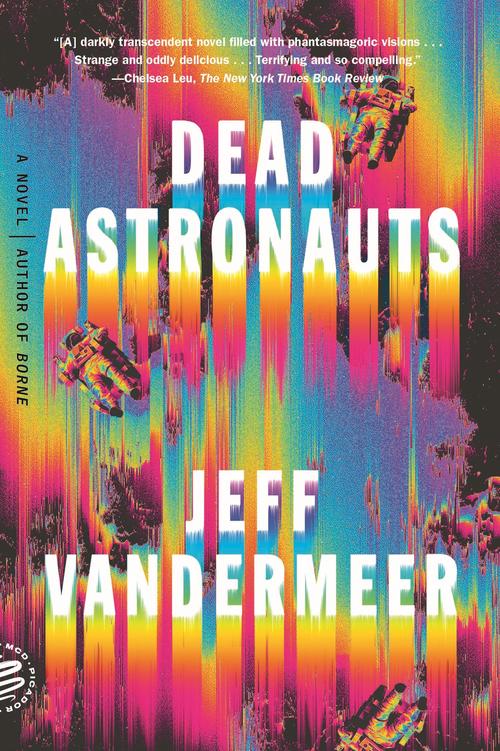 Jeff VanderMeer's Dead Astronauts presents a City with no name of its own where, in the shadow of the all-powerful Company, lives human and otherwise converge in terrifying and miraculous ways. At stake: the fate of the future, the fate of Earth—all the Earths.

A messianic blue fox who slips through warrens of time and space on a mysterious mission. A homeless woman haunted by a demon who finds the key to all things in a strange journal. A giant leviathan of a fish,...