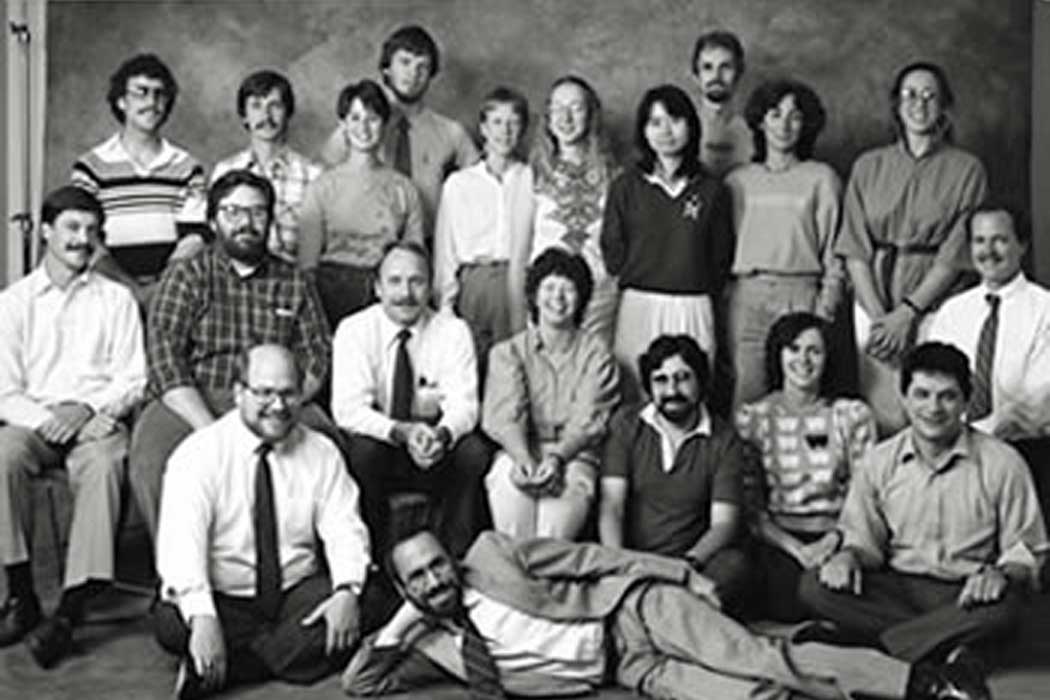 I learned that I loved working with machines in the early 1970s, when I joined a group called the Ithaca Video Project. We taught ourselves to make videos using the first recorder that individuals could use, the Sony Portapak. We made documentaries, got involved in social and political activities, revered the work of the pioneering video artist, Nam June Paik. It was an exciting time. Small machines in our hands! Breaking the hold of behemoth corporations! If this sounds like the coming of the first PCs, it was. When I saw a 1978-era microcomputer, the TRS-80, in the window of a Radio Shack store, I thought: Is this anything like the Portapak? Can you use it for social action? Will it make art? And, without any forethought, I bought it. When I got my first decent program running, I sat back and marveled at it as if I’d just mined a ruby. Over the twenty-odd years I worked as a technology practitioner, I came to realize that my wrestling with the TRS-80 was not just a beginner’s experience; it was a paradigm for all the work ahead. That state of not-knowing proved permanent as I moved from machine to machine, operating system to operating system, language to language, each move a re-encounter with bafflement, as my introduction to the mainframe. Failing was also a permanent state of affairs. Programs crash. The causes of bugs hide from discovery. Designs lead to dead ends. Goals are ill-conceived. Deadlines are absurd. One must develop a high tolerance for failure, learn to move forward from discouragement, find a ferocious determination, a near-passionate obsession to solve a problem, meanwhile summoning the pleasures of the hunt.

It was not easy for me . . . It was one thing to wrestle with the TRS-80 in the privacy of my living room. When I worked for others, though, I was always certain my incompetence would be revealed at any moment. I had taught myself chaotically. I learned what I had to know when a job required it and where my interests randomly let me. I was aware at all times that I had only islands of knowledge separated by darkness; that I was surrounded by chasms of not-knowing into which I was certain to fall.

. . . I learned I was not alone. I met a postdoctoral student in computer science at Berkeley. I talked with him about my islands, the darkness, the fear. He answered without hesitation: “Oh, I feel that way all the time.”

—from “Programming for the Millions” I once had a job where I didn’t talk to anyone for two years. Here was the arrangement: I was the first engineer hired by a startup software company. In exchange for large quantities of stock that might be worth something someday, I was supposed to give up my life.

I sat in a large room with two recently hired engineers and three Sun workstations. The fans of the machines whirred; the keys of the keyboards clicked. Occasionally, one or another of us would grunt or mutter. Otherwise, we did not speak. Now and then, I would have a temper outburst in which I pounded the keyboard with my fists, setting off a barrage of beeps. My colleagues might look up but never said anything about this.

—from “Outside of Time” And then there was the Voyager, a thirteen-pound portable Sun UNIX Workstation, a lonager I got from the project I was working on as a contractor, an ingenious machine designed to fold up for carrying and then unfold on the desk like a delicate work of origami. It had put itself to sleep after having been idle for thirty minutes, and now, at the touch of a key, it came to life. Its high-resolution, color LCD screen showed a graphical interface more beautiful than the Mac’s, its colors glowing like pearls in the delicate dark of the room.

The PC’s modem screeched as it dialed up the internet. Its screen gave off a flickering light. Still, despite insomnia adn screech and flicker, I admitted to myself that I was happy. I liked sitting in a darkened room surrounded by fine machinery. . . . I bought a robotic cat. It wasn’t very advanced, just a cheap, vaguely cat-looking thing from Toys “R” Us. It was made of metallic plastic, nothing furry and fuzzy about it . . . .

The “robot” was laughably unlike a cat ot anyone who knows the real thing. It comes racing toward you when you call it, for instance, preposterious in a living cat. But one of its behaviors “worked.” I left it on while I read, and after a time it began to make a pitiful noise. It seemed to “suffer” if I ignored it for some preprogrammed interval. Soon I found myself getting up to “pet” it—stroking an area on the plastic head that converts the whimpers into a soothing sound, not a purr but producing a similar effect. A cute trick, I thought, to get me to want to give it attention and “affection.”

Sadie, my real cat, found the robot curious at first. She noticed its motions and sounds. Being nearsighted, like all cats, she went up close and sniffed it. Not finding any animal scent, she walked away and ignored it.

Then, about an hour later, Saide came up to me, doing hte things she always does when she wants attention: a slight scratching of my hand at half-claw, an intent look, a waving around of her tail, and, most of all, a rigidity in her entire body that always tells me without a doubt that she wants—no, needs—the attention we call petting. I gave her what she asked for. She started purring.

. . . I looked down at Sadie. Suddenly I could not help wondering if all this asking for and getting attention, this purring, wasn’t just like the hardwired program in the plastic robot. Sadie at that time was nineteen years old, a wily and mature creature who would look me dead in th eye, and with whom I had a complicated relationship. Nevertheless, I was momentarily a little afraid of her. Was she nothing more than a mechanism, a cheap little program, an empty zombie? I looked into her eyes. And I asked aloud, “Are you just a trick?” The PowerBook started up by sounding a chord—E major?—and immediately I was drawn back to the time when this machine was my constant companion, carried everywhere despite its weight, a kind of ballast for my then foundering life. Even before it showed me the files and folders it held, I was taken by the sound and feel of it, the crackling disk drive spinning up to speed, the maddening keyboard I’d cursed for its lack of proper “page up” and “page down” keys, the dim intimacy of its small, blue-tinged scren, the silky touch pad that had seduced me into buying an Apple machine despite its incompatibility with all the software I’d ever owned. It took me back to the first place I’d ever used it: a sublet apartment in New York, the city where I’d grown up but no longer lived, my father dying in a hospital I could see from the living-room window.

On the screen, a different set of Russian-doll folders exposed the nasty struggle to write a book: essay s in version after version. Yet another “Letters for the Drawer,” with its own collection of anguished, unsent mail. A folder called “Kaddish,” where I kept track of my search for a synagogue that did not make me feel like an outsider when I said the prayer for the dead, the file creation and modification times (2:00 a.m., 5:00 a.m.) holding the indisputable record of an intractable insomnia. And then something called “scary untitled folder,” inside of which was a file titled “suicide.doc,” which began: “Some people are suicides and some are not. Here is a simple test. You wish to die because a) no one loves you, b) you have just been fired, c) you can’t stand being yourself for another moment.” The second paragraph goes on to say, almost cheerfully, “The correct answer is C.”

I shut down the machine, put it back in the cheap briefcase, and returned it to the dusty floor of the guest closet.

—from “Memory and Megabytes” Making videos before that moment involved equipment that cost tens and hundreds of thousands of dollars. What you could see on a television, that screen that beamed culture into homes across the world, was controlled by broadcasters and large corporate advertisers. Portapaks were expensive for an individual, but groups across the country were buying them through grants and collective funding. That small machine offered the opportunity to break the hold of the corporate controllers, a chance to redefine what one could see on a TV screen. What seems obvious now, video recording machines in the hands of the millions, began with the retail sales of a mass-produced media machine called the Portapak.

…Film requires expertise, but ayone handed a Portapak learned how to use it within minutes. The reel-to-reel recording deck came in a leather case with a strap, and it was light enough to sling over your own shoulder and carry for a while (even on my shoulder, and I weighed 100 pounds). The camera had a zoom lens with a mic on the top. You connected a cable between the camera and the deck. Then all you had to do was press a button on the camera handle to start recording video and sound. You had to focus. You could zoom in and out as you wished. The machine did the exposures automatically. It even operated in low light. You could record political meetings held in dim rooms, people smoking cigarettes and dope and talking of revolution, the low-light exposure producing a peppering haze of black-and-white grain, adding to the sense of subterfuge, as in an underground movie. Protest, activism, art, guerrilla television—all was made possible (or dreamed of) by the coming of the Portapak.

—from “The Party Line” 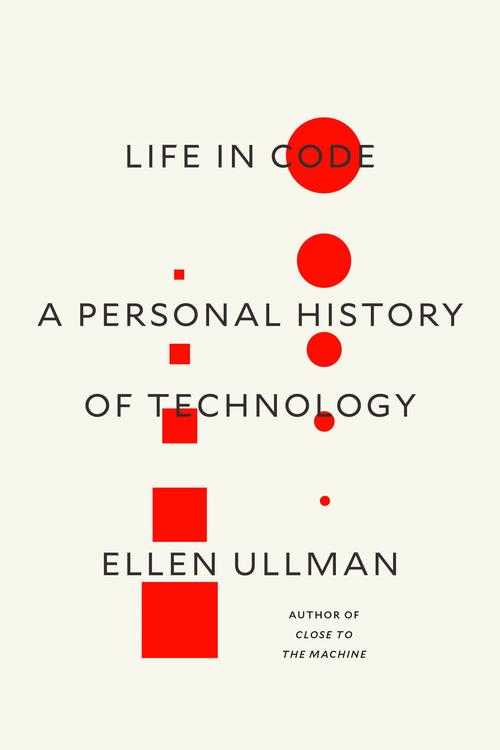 The never-more-necessary return of one of our most vital and eloquent voices on technology and culture, the author of the seminal Close to the Machine

The last twenty years have brought us the rise of the internet, the development of artificial intelligence, the ubiquity of once unimaginably powerful computers, and the thorough transformation of our economy and society. Through it all, Ellen Ullman lived and worked inside that rising culture of technology, and in Life in Code she tells the...