Walking the Same Streets
Kafka on the Border

The Sounds of Northwest London 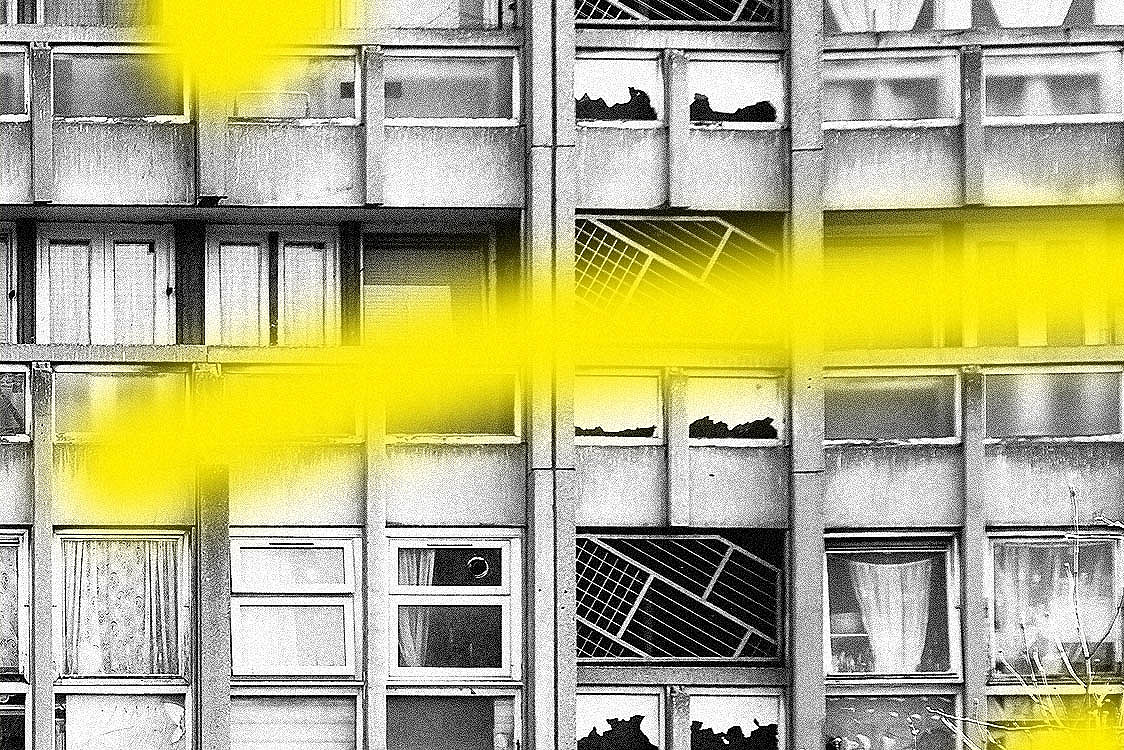 I was on an uptown-bound bus in Manhattan when I first heard Skepta’s 2016 Mercury Prize-winning album Konnichiwa. It’s an apt soundtrack for a bus ride through the city, an ode to urban life. I kind of understood the slang, I fully understood the attitude, and I was very much into that one song with A$AP Nast. Reading Guy Gunaratne’s In Our Mad and Furious City for the first time gave me a similar feeling—the Northwest London housing estates felt, in those pages, like the housing projects in western Queens that I’d grown up in.

I immediately sank into the lives of Selvon, Ardan, Yusef, Caroline, and Nelson, and into the rhythms of their dialects, which evoked both the rap music I was reared on and the Caribbean patois of the many West Indian immigrants who claim New York City as their home. New York City is my home. It’s also a hard place in which to carve a space for yourself. And it’s why these characters’ struggles resonated with me so deeply: they’re all trying to make a place for themselves on the fringes of a bustling city.

I’ve never been to London, but I’ve listened to a lot of grime. And from what I’ve gathered, the sound of London is a lot like the sound of New York City—mostly din, a cacophony of lives lived too closely . . . and drums. I know that noise. And I know grime music. Mostly because one of my cousins played me Dizzee Rascal’s “Fix Up, Look Sharp” when it hit the U.S. in 2003 and I’ve been hooked ever since. But, also, because the city that birthed the genre just seems so damn familiar.

Yet, one of the plot threads in In Our Mad and Furious City sees the young grime devotee, Ardan, expressing a love for the music of his hometown specifically because of how distinct it is from the American hip-hop his peers so often seem to favor. In fact, while hip-hop and grime share a lot in common, adherents of the UK sound will argue that it’s a wholly distinct musical genre, with its own roots and influences, including reggae, bashment, dancehall, garage, and drum and bass—a unique cultural heritage that has come to represent an oft-unnoticed sector of London’s crowded landscape. 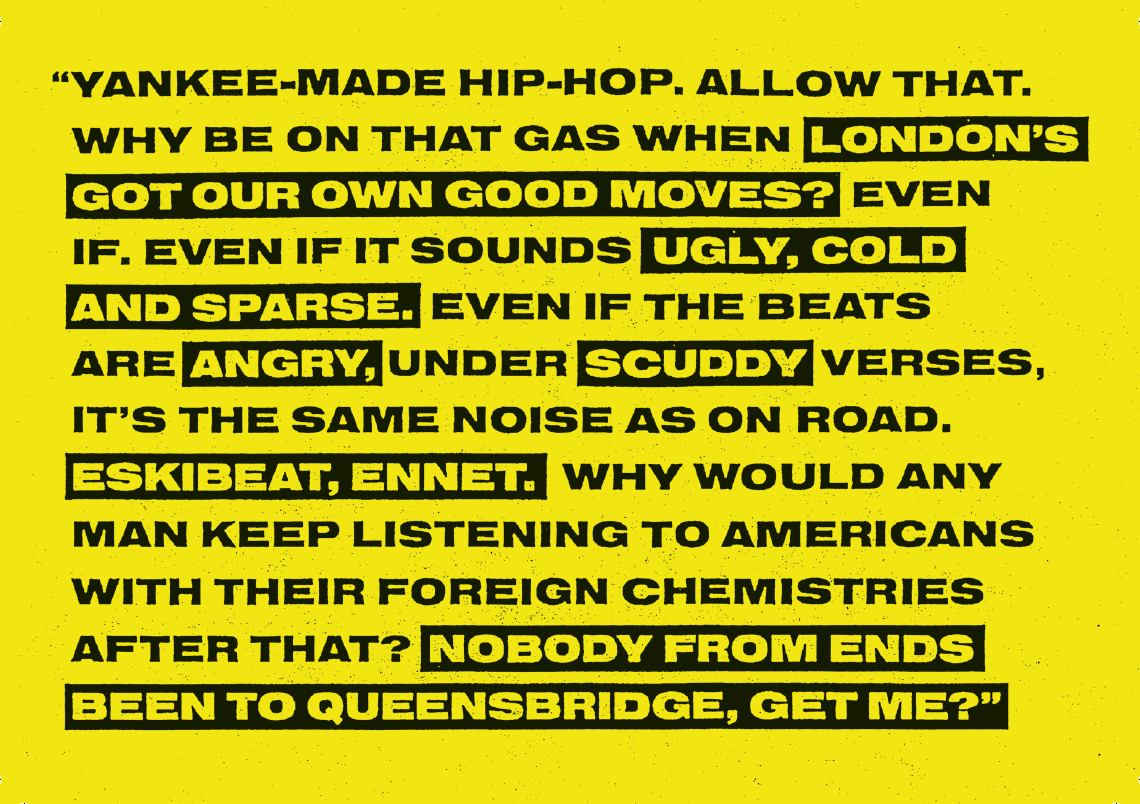 All that to say that when I first read In Our Mad and Furious City, I had the voices of these five distinct characters playing over a soundtrack. My soundtrack was mostly composed of tracks off of Konnichiwa, but also songs from the likes of Kano, Novelist, Giggs, and Stormzy. When I asked Guy to compile a playlist to accompany the novel, I was hardly surprised that it very closely matched my own personal soundtrack for the book. But, of course, Guy took it a step further, including records from Thom Yorke, King Krule, Young Fathers, the Swet Shop Boys, and Billy Bragg’s rendition of “Blake’s Jerusalem,” which, in his words, is “probably the most English song ever. The unofficial national anthem . . . blared by many an English nationalist in the face of British multi-culture, and at England football matches.” This man knows his city; he knows its sounds. And in In Our Mad and Furious City, as in the accompanying playlist, he renders those sounds vividly.

So, here it is: Guy Gunaratne’s official playlist to his Man Booker-nominated debut In Our Mad and Furious City—the first proper grime novel:

36. “Stronger Than Ever,” Raleigh Ritchie 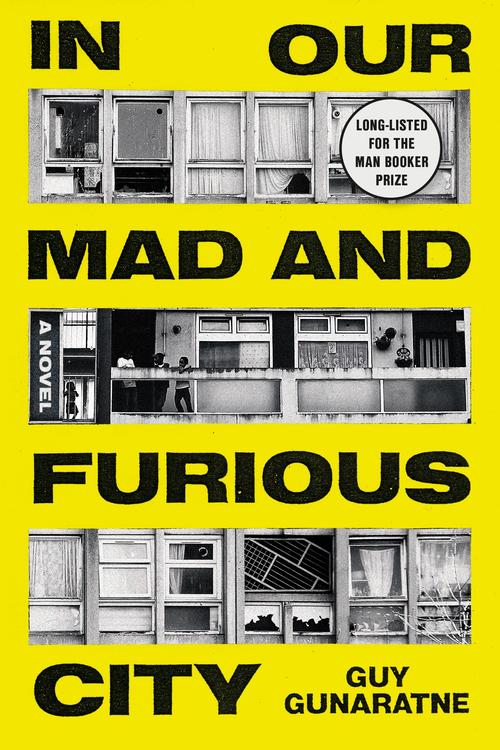 In Our Mad and Furious City

Short-listed for the 2018 Goldsmiths Prize

Inspired by the real-life murder of a British army soldier by religious fanatics, Guy Gunaratne’s In Our Mad and Furious City is a snapshot of the diverse, frenzied edges of modern-day London. A crackling debut from a vital new voice, it pulses with the frantic energy of the city’s homegrown grime music and is animated by the youthful rage of a dispossessed,...